Aboriginal Tasmania at the University of Tasmania 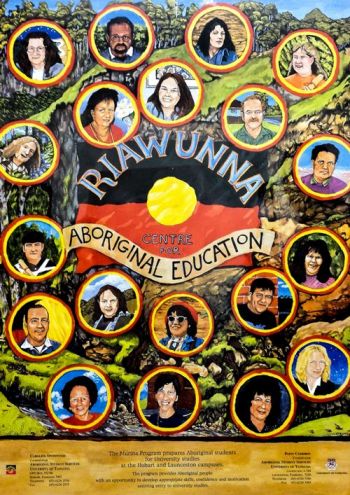 To combine the individual programs of the two institutions a new entity was established, the Riawunna Centre for Aboriginal Education. Riawunna had a physical presence on the University's Newnham and Sandy Campuses. In 1991, Patsy Cameron was appointed the Centre's director in the north and in the south Riawunna was directed by Greg Lehman. The creation of Riawunna was celebrated with a new building and community space on the Newnham Campus opened in April 1992 by VC Alan Gilbert and three Elders, Aunty Molly Mallet, Aunty Ida West and Aunty Clyda Mansell.

The word Riawunna comes from the language of the Bruny Island people in Southern Tasmania (Plomley 1965: 183) and can be translated to mean circle. This naming is reflective of Aboriginal cultural, spiritual and historical values. Circles are integral to the spiritual expressions of Aboriginal Tasmania and represent traditions dating back over 40,000 years. In contemporary times circles remain culturally and spiritually important in the artistic expressions of Aboriginal identity and values. The nine circles in the Riawunna logo also represent the Aboriginal nations as well as education, knowledge, strength, and continuity as the source of knowledge for life and community. They also represent kinship, cultural and spiritual togetherness as the circle links our present to the past and the future. The artwork of Riawunna symbol – was designed by June Brown

The functions of Riawunna grew from 1991. Aboriginal Studies was introduced as a major within the Bachelor of Arts, Indigenous Tutorial Assistance Scheme (ITAS) services were provided to students and the murina program was introduced in to provide a culturally appropriate educational pathway for Aboriginal Tasmanians to enter higher education. Community involvement was enhanced with the appointment of Elders in residence at the University. Aunty Molly Mallett, the first Elder in residence was appointed to the Newnham Campus. Other Elders who have held this role include Aunty Alma Stackhouse and Aunty Phyllis Pitchford, who holds the position of Senior Elder in Residence in 2015. Aunty Molly was awarded an honorary doctorate in recognition of the enormous contribution she made to Aboriginal education over many years at the University.

Over the past 30 years, many notable Aboriginal Tasmanians have worked or volunteered their skills and experience to Aboriginal education at the University. Directors at Riawunna have included – Greg Lehman, Patsy Cameron, and Clair Andersen. Other staff include: Deb Brown, Lola Greeno, Lyell Wilson, Tanya Harper, Ann Sharman, Vicki Matson-Green, Caroline Spotswood and Sharon Dennis. 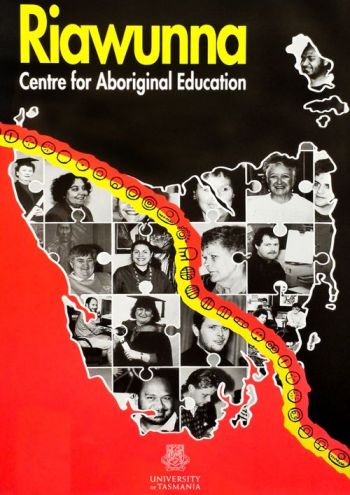 The success of Riawunna is evident in the rising level of Aboriginal enrolments at UTAS since its inception. The number of Tasmanian Aboriginal students have progressively increased from 160 in 1993, to 462 in 2014. The introduction of Riawunna bursaries and scholarships in 2000 has assisted more than 30 students with their studies, while the Indigenous Tutorial Assistance Scheme (ITAS) continues to support some 50 students each year.

Other changes include the appointment, of Clair Andersen as the Aboriginal Higher Education Advisor, and Professor Maggie Walter as the inaugural Pro-Vice Chancellor Aboriginal Research and Leadership, with the role of building a vibrant Aboriginal intellectual presence across the University's three foci, community, research and students.

In 2017, Riawunna found a new home on the Sandy Bay Campus, level 3 of the Social Science's Building. The change of location gives Riawunna a central home and strong visual presence. Riawunna, the office of the Pro Vice-Chancellor Aboriginal Research and Leadership and other Aboriginal business areas are strongly placed to provide a high level of support to students, meet the needs of the Tasmanian Aboriginal community and ensure Aboriginal research is being done in a culturally appropriate way.