Uncovering the missing link in Darwin’s theory of evolution

Research has found that selenium correlates to nearly every major extinction and growth event in Earth’s 4.5 billion year history.

Share this
Articles
In 1859 Charles Darwin declared that evolution on Earth was driven by adaptation to changes in the environment. But Darwin couldn’t explain why there were periods of significant growth and periods where very little evolution took place at all.

Distinguished Professor Ross Large has uncovered the missing link in Darwin’s theory of evolution. That link is the trace element selenium. His research has found that selenium correlates to nearly every major extinction and growth event in Earth’s 4.5 billion year history. Discovering the key to evolution

“We have discovered that selenium is the critical element for life. When levels of selenium have been low, major extinction events have occurred. When levels have been high, life has flourished; like for example the evolution of giant fish,” he said. 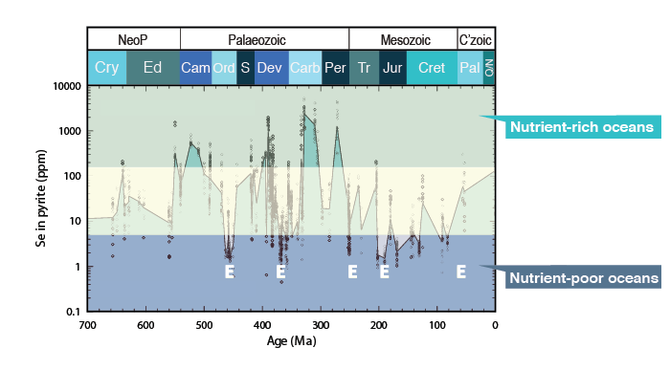 It is movement of the Earth’s continents that influences the amount of selenium in the oceans. As the continents move and collide mountains are created. These mountains erode over time and disperse nutrients via rivers into the ocean.

Levels of selenium become low when there is little movement in the earth's continents. It is a rare trace element, so without an active supply it can become dormant in the sediment on the ocean floor. Without it, things begin to die and life cannot flourish again until the continental plates collide, releasing selenium back into the oceans.

Professor Large and his team have developed a method for mapping the oceans trace elements over the ocean’s 3.5 billion year history. The method is only possible using the unique facilities at the University of Tasmania, which is the only lab of it’s kind in the world.

“The facilities at the Centre of Excellence in Ore Deposits (CODES) at the University of Tasmania are world renowned. Scientists come from all over the world to conduct research here,” said Professor Large.

It is because of these exceptional facilities that we have been able to explore the role of trace elements in evolution. Rocks are filled with messages from billions of years ago. It is incredibly exciting to release those messages and fill in the blanks about the history of the Earth.

There is so much more to learn.

Interested in making your own discoveries? Apply now to become a research student.