Into space: How do you train for an environment that will kill you?

The answer is, head for the deep. Dr Alexander Forrest assists NASA to train for space exploration using underwater robotics.

He specialises in environmental fluid mechanics, ocean engineering and the development of AUVs – Autonomous Underwater Vehicles.

“Autonomous underwater vehicles are submerged robotic vessels that can be programmed to a predefined course. They intelligently alter their speed and course to avoid obstacles. Sensors are attached that collect data en route,” said Dr Forrest.

His skills and background are in both science and engineering.

“To tackle the big questions in harsh environments, we need to bring science and engineering together,” he said.

Underwater robotics can be used as a proxy for space research because the physics and the medium are similar to that of space. There is no WIFI, there is a delay in communications and, if things go wrong, the environment will kill you, said Dr Forrest.

“We can practise things underwater before we try them in space, and use the lessons learned to inform further research and training.” 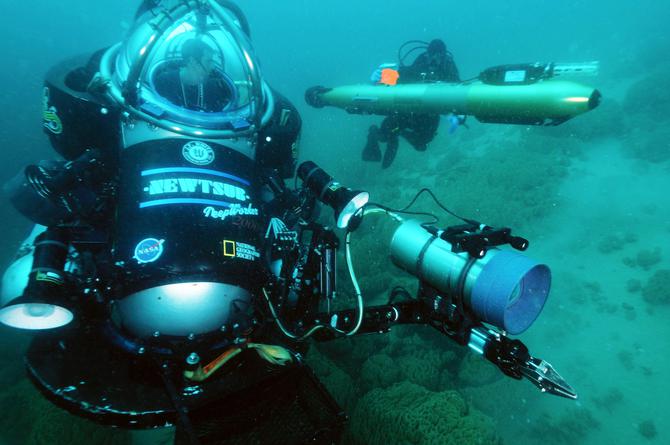 Courtesy of the University of British Columbia and Donnie Reid Photography.

Emerging platforms are allowing us to capture information that has not previously been available.

Based at the University of California – Davis, and also an Adjunct Senior Researcher at the Australian Maritime College

at the University of Tasmania, Dr Forrest has been working at applying emerging marine technologies as analogues for space research and previously helped oversee the development of the new AUV facility at AMC that will see Tasmania’s capabilities become world leading.

While helping NASA train for space exploration is exciting, it is not the focus of his work.

“The AUVs and their application that we are developing are specifically designed for under-ice exploration. These environments require significant engineering challenges to be addressed in order to collect reliable data. The same as in space.”

By applying his engineering skills to environmental fluid mechanics problems, he has been involved in developing world-leading applications of AUVs from coral reef systems to icebergs.

“AUVs can map and explore new environments from the sea floor to the ice surface and everything in between. My research focuses on environmental fluid mechanics, or the interaction of fluid, such as that in oceans and lakes, with the environment. Ultimately I’m motivated by finding data that can help us improve our understanding of the environment to be able to predict how it will change in the future.”

Interested in diving into research? Apply now to become a research student.