Weathering a Brainstorm during Dark Mofo

Master of Fine Arts graduate, Darren Cook, takes us into the eye of extreme weather patterns in the mind.

When Master of Fine Arts graduate, Darren Cook, was invited to exhibit at Brainstorm as part of Dark Mofo, he started by thinking about both weather patterns and cognitive patterns. He thought about shelter from storms and their cognitive equivalent.

“Meditation is kind of like a shelter from extreme weather storms or patterns that happen in the mind,” he said.

To create the installation, Darren started with meditation as a central theme and then determined what the physical forms would be.

Central to his installation were two weather balloons – one filled with helium and one with air – that represented a state of equilibrium. Around the balloons, video was projected onto objects within the space and speakers projected sound repeating the questions, 'How are you? How are you now?’

These questions, like a meditation technique, brought the focus back to the present moment highlighting imbalance and the interminable fluctuations of life.

There were two oppositional forces in the balloons; one pushing down and one rising, when they reach a stillness the work has found a state of calm. But as wind came in from outside the gallery door, and there is the movement of people through the space, it threw that equilibrium out of balance.

In a way memories are like storms, particularly memories associated with traumatic events. They can block out the sun. They can be overwhelming and destructive. 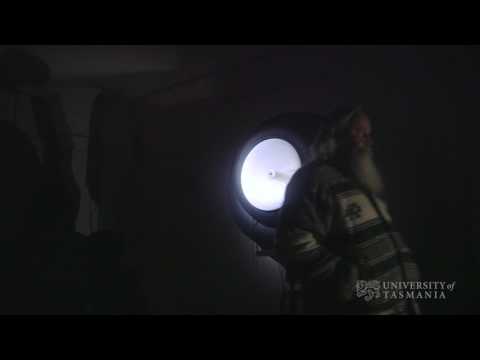 Darren said that there were an enormous amount of ideas that came out of the process of preparing for Brainstorm that he would like to explore in future work. The installation was the first work that has incorporated his education in fine art along with psychology.

Each work feeds into a sort of continuum of practice. I started out as a painter and then sculpture and drawing, then digital imaging, video and sound, and then performance and finally installation. And now I’m studying psychology.

“Moving through a lot of mediums has helped me to realize what my actual practice is, and where it’s coming from. Over time you start to see common threads that run through your work.”

Darren said that doing his Master of Fine Arts at the School of Creative Arts was a significant opportunity to extend his practice.

The incredible support of the people at the art school allowed me to experiment and try new ideas. It’s that supportive environment that helps you to push yourself, and if you fail, it’s no big deal. They give great feedback, and while it’s encouraging, it’s highly critical as well. The feedback then informs your next project.

Brainstorm was Darren’s first involvement with Dark Mofo, having been invited to participate by exhibition curator and Head of Art, John Vella, as one of nine Tasmanian artists.

I’m overwhelmed by the number of people who came. It’s a completely new scenario for me to have thousands of people coming to see my work. It’s incredible.

More than 40,000 people poured through the University of Tasmania's Hunter Street campus to see the exhibition in 2016 as part of Hobart's internationally acclaimed mid-winter festival.

Like the idea of participating in Dark Mofo? It's possible as a Bachelor of Fine Arts student at the University of Tasmania.