Explainer: Why do whales strand themselves?

One of nature’s strangest mysteries.

In June 2015, 337 dead whales were found in a fjord in Chilean Patagonia. It was quickly declared one of the largest whale stranding events known to science.

Researchers suggested a recent explosion of toxic red algae could be behind the mysterious phenomenon, but they couldn’t say for sure.

The following year, more than 80 short-finned pilot whales beached themselves on the coast of the Bay of Bengal in India, seemingly unable to navigate away from the shoreline.

When rescuers managed to move 36 of them back to sea, they appeared disoriented, and struggled to re-join their pod. Some even found their way back to the beach and stranded themselves once more.

And earlier this year, in what has become one of the biggest mass stranding events in New Zealand history, 416 pilot whales beached themselves on the South Island's Farewell Spit beach in February, followed by roughly 240 more that ran aground between the settlements of Puponga and Pakawau. This time, many of them were refloated.

Potential explanations abound, including solar storms, military sonar, and even the Moon’s gravitational pull, but what’s become increasingly clear each time is that no one really knows what’s going on.

And that’s not necessarily a bad thing, according to Mark Hindell, Professor of marine science at the University of Tasmania in Australia.

One cause to solve them all?

When it comes to such mass strandings, it might seem as if we’re breaking records left, right, and centre but, as Hindell points out, it’s more a reflection of how easily we can receive news these days than an indication of a mysterious phenomenon that’s suddenly become worse.

Because for almost a century, nothing has come close to the Chatham Islands event of 1918, when roughly 1,000 whales beached themselves off the coast of New Zealand in what is thought to be the largest mass stranding in recorded history.

The reality is that mass strandings are nothing new, Hindell says, it’s just that now we’re all watching. “It’s easy to over-dramatise it, but it’s been happening for as long people have been taking records.”

He adds that if we’re looking for one straight answer to solve all, it might not ever come. 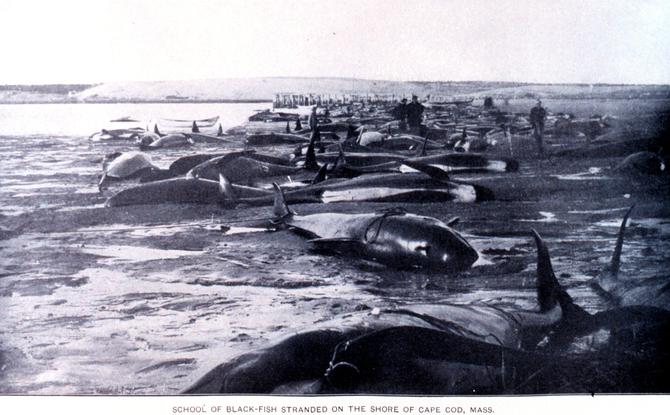 A mass stranding of pilot whales on the shore of Cape Cod in the US in 1902. Credit: National Oceanic & Atmospheric Administration (NOAA).

Whether it’s human interference or nature getting in the way of the whales’ ability to calculate where they are in relation to the coast is a tricky question, because there’s evidence pointing to both.

Military sonar, which uses soundwaves to navigate, communicate, and detect objects on or under the water, is known to disorient cetaceans – the whales, dolphins, and porpoises.

Back in March 2000, 17 dolphins were stranded in the Bahamas following a US Navy sonar exercise, and the official explanation was that they had experienced acoustically-induced haemorrhages around the ears, which led to severe disorientation.

And in 2002, 14 beaked whales stranded themselves in the Canary Islands, just four hours after the activation of mid-frequency sonar during an international naval exercise called Neo Tapon.

Forensic evidence suggested that the whales had suffered from decompression sickness – bubble formation in the body’s tissues – which was thought to have been triggered by the sonar exercise.

“It’s controversial, but there are a number of studies that suggest military sonar can cause whale stranding, and I think the evidence for that is not too bad. Connections have been made quite well for isolated stranding events,” Professor Hindell said.

Other causes have been linked to natural phenomena, Hindell explains, noting that particularly strong western winds around Tasmania have been connected to increased standings in that area, possibly due to the whales’ food being blown closer to the shore.

“Environmental factors affect all aspects of animals’ lives,” he said.

NASA is currently investigating another possibility – solar storms, caused by massive bursts of harmful cosmic rays fired at Earth's magnetosphere from the Sun.

Whales and other cetaceans use their ability to sense Earth’s magnetic field to help them navigate their way through the ocean. Solar storms can have a significant effect on those fields.

In fact, one particularly powerful solar storm in 2015 appeared to ‘crack open’ Earth's magnetosphere, when a giant cloud of plasma ejected from the Sun’s outer atmosphere struck our planet’s magnetic field at speeds of about 2.5 million kilometres per hour (1.5 million mph). Everyone loves to see a good mystery solved, but Hindell says we need to be careful about how much weight we put behind each new explanation for the mass die-offs. In other words, don’t believe the news stories that say we’ve finally cracked it.

“It’s a plea for empiricism, to think these things through carefully,” he said. “We need to look at things with proper, evidence-based science.”

As the leader of a massive marine survey project, a collaboration with scientists all over the world to put forward evidence-based recommendations for where Marine Protected Areas (MPAs) should be established in our oceans, Professor Hindell said it’s particularly important that members of the public understand how researchers approach uncertainty in science.

“We don’t have all the answers, and that’s frustrating for policy-makers, because we can’t say for sure what’s happening,” he said.

“It’s like the way climate scientists talk about the climate change debate - because they are scientists, they’ll always say ‘We think it’s this’, or ‘This is the best hypothesis’, but to a non-scientific audience, it’s seen as uncertainty. There’s a real mismatch on how it’s communicated.”

Working with tracking data from more than 4,000 penguins, seals, whales, birds, and other animals living in the Antarctic and Southern Ocean region, Hindell and his team are in the process of identifying important feeding ‘hubs’ that have, until now, gone unnoticed.

They’re also working on expanding their survey to include 100,000 animals around the globe, and it’s hoped this unprecedented amount of information could one day inform the mass strandings debate.

“It’s pretty exciting, because nobody has tried to do this in the past – there’s been no global synthesis of the tracking data,” Professor Hindell said.

“The challenges are enormous. It’s not going to be a simple job, but we’ve done it in the Antarctic, so we know what we need to do.”