How a passion for holidays lead this researcher to tracking tourists.

Dr Anne Hardy grew up in one of the most beautiful tourist destinations in the world: Tasmania. Now, her research career is devoted to exploring the tourism industry.

Dr Hardy is a senior lecturer in the Tasmanian School of Business and Economics and an Enterprise Fellow in the College of Arts, Law and Education at the University of Tasmania.

Her research focuses on tourist behaviour and sustainable tourism.

“I always loved taking holidays.  I went on a lot of holidays with my family as a child.  When I was around 16 my parents actually started up a tourism business and so I guess those two passions collided.

“I suddenly realised that running a business was a really complicated thing, particularly in an island state like Tasmania.

“And I also just love discovering things.  So that’s when I thought well, maybe I’ll do tourism research.”

Dr Hardy now spends a lot of time following tourists around: with technology.

“We are really interested in understanding exactly where tourists go. We designed an app called Tourism Tracer.”

The app has GPS technology that includes a survey so the researchers understand exactly who the tourists are and exactly where they go. 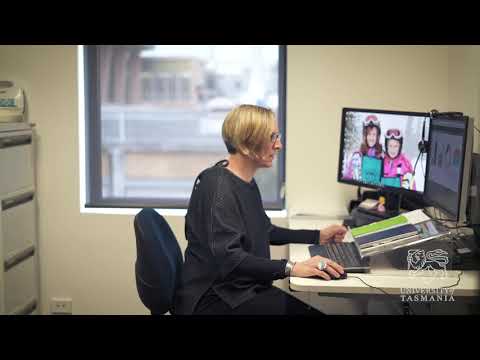 That data is beamed real time onto the dashboard so tourism authorities and the industry can actually understand in almost real time exactly where tourists are travelling.

The idea for the Tourism Tracer began in the early 2000s when Dr Hardy was working in Canada.

“I’ll never forget talking to someone from Tourism British Columbia who handed me a stack of surveys and maps from tourists.

Dr Hardy said she realised that while we knew about the impacts of travel, the psychology behind travel, and more, we just didn’t know where people actually went.

That concept burned in my mind until I was able to actually do something about it.

From there Tourism Tracer was born. Working with a Tasmanian developer, the team commissioned a dynamic, visually appealing app and corresponding dashboard that was free to access for anyone who wished to see the data.

Once the actual data came in and we saw the dynamic movement, that was when we got really excited.

“We suddenly realised there’s a large amount of people doing these massive drives.  They’re driving hundreds and hundreds of kilometres and 15 per cent of them drive between 11pm and 6am,” Dr Hardy said.

“That was a big, big shock for us. We thought ‘hold on a minute, there’s a lot of risk taking going on here.’”

Dr Hardy said once the data started to come in, she began to receive calls from all over the world.

“We started to get a huge amount of requests for proposals and we suddenly realised that this was something that was almost bigger than a research project.”

Recently, the University of Tasmanian signed a licensing deal with a new company called Tourism Research Technologies, meaning the concept has grown from a research project to a fully commercialised product.

“To have all this interest was overwhelming.  I continue to pinch myself and think, ‘I just can’t believe this has actually happened.’

“You always want to do something that makes a difference.”

Find out more about studying Business and Economics.