Poo is the prize for ecological researchers who scavenge seeds.

Every three months Matthew Fielding arrives at Melbourne Airport with a large box to put on a plane.

When he tells the airline staff what’s in it, they rush off to speak to their managers, mouths agape.

After all, it’s not every day you are asked to check in a couple of kilos of emu poo.

Aside from providing a moment of incredulity and humour, collecting the scat samples and bringing them back to Tasmania has an important scientific purpose.

Matthew, a University of Tasmania alumnus and scientist, is part of a team who are investigating the impact of emus on flora and fauna. Hundreds of years ago, emus roamed Tasmania, but they died out not long after European arrival.

Matthew and fellow researcher Tristan Derham are collecting the scats from south-east Victoria, which was once connected to Tasmania, to investigate the role the large flightless birds play in dispersing seeds.

“Emus are really good at dispersing seeds and plants around the environment because they basically eat anything, travel large distances in a day and then poop out the seeds, which provides a great substrate for those seeds to grow,” Matthew said.

“Each season we go over to Wilsons Promontory to collect emu poo and then we bring it back to Tassie where we sift through it to examine and identify the seeds that they are eating and moving around the landscape.” 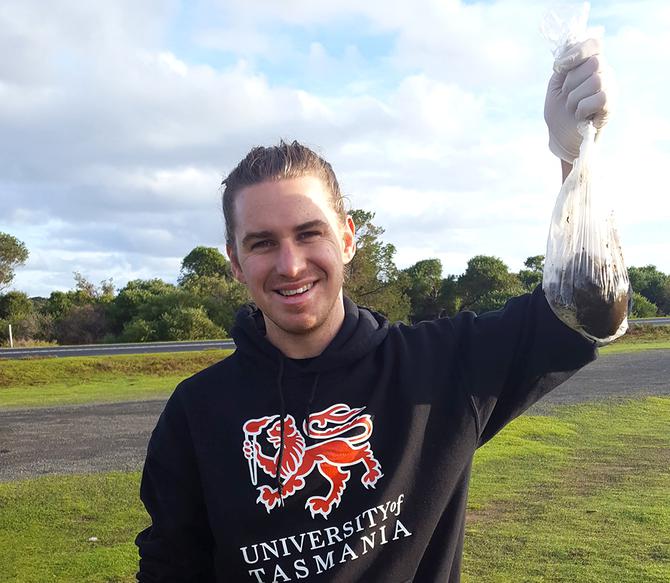 Bigfoot? An emu print is left in the sand at Wilsons Promontory, Victoria. 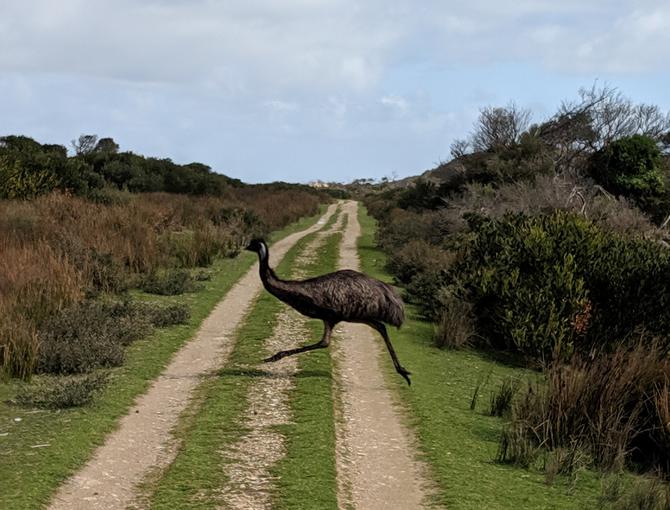 As part of his research, PhD candidate Tristan Derham is modelling where the emus lived, and where they could be reintroduced.

His early data shows the bird could happily live throughout the east of Tasmania where it is dryer and flatter, as well as the Midlands.

The study is just one of the projects that Matthew is involved in during his doctorate degree at the University.

In 2017, his study into the effects of land-use change on predatory bird species and future repercussions in Tasmania, was awarded a prestigious Governor’s Environment Scholarship.

Since then, he has published peer-reviewed research on the interactions between roadkill, Forest Ravens and songbirds in Tasmania.

“What drives me is the conservation of wildlife,” Matthew said.

“I love the outdoors; it’s so amazing to be able to combine that with science and contribute new ideas that could conserve species.”

Lately, he has been spending time on the Bass Strait islands studying woodland birds.

“Part of what I love about field work, is that you feel like an explorer. I get to go to these isolated and beautiful little pockets of the world that are almost forgotten about.”

His intrepid adventures reap rewards that could not be replicated elsewhere.

“When I was on Flinders Island, I managed to see all four types of cuckoos in one day,” he said.

“But some of these islands have been heavily modified for agriculture. You can see it continuously growing and more land is being cleared, so I’m keen to ensure we don’t lose any species as a result of that.”

Now in the second year of his PhD, the 28-year-old is looking at the causes behind the recent growth in Forest Raven populations on the Bass Strait Islands, and what impact this has on other birds, including the vulnerable King Island Black Currawong.