Share this
Articles
Each day that she works in the chemistry lab, University of Tasmania PhD candidate Atiyeah Ganjalinia gets to see the world at the smallest possible scale.

“The smallest fragments fascinate and intrigue me. At this scale, if you just look at cells, they glow like Christmas lights,” Ms Ganjalinia said.

The chemistry PhD candidate at UTAS/Australian Centre for Research on Separation Science (ACROSS), Ms Ganjalinia is developing a 3D printing process that fabricates microfluidics devices with a lot of detail and at a normal printing speed.

What is a microfluidics device?

A microfluidics device is a flat device the size of your toe, which contains a channel so narrow it can trap a single cell.

The device, commonly referred as chip, enables researchers to precisely control a tiny volume of liquid - smaller than a droplet.

The liquid is often the media in which cells grow and survive, such as blood or plant tissue culture, but can be any solution used to carry out laboratory tests.

“Biological and biomedical researchers can find out more about cell abnormalities by viewing an individual cell trapped in the microchannel,” Ms Ganjalinia said.

Microfluidics devices could be ground-breaking for biomedical applications like cancer research and disease diagnosis. 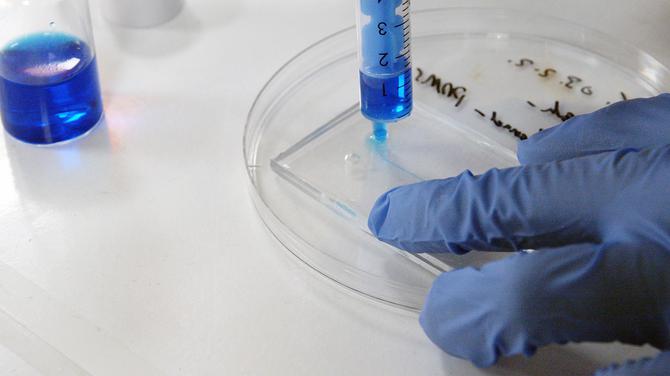 The mobile phone of chemistry

Ms Ganjalinia describes the microfluidics device as the "mobile phone of chemistry".

“It’s small and versatile, with lots of applications at an affordable price," she said.

“Conventional methods of microfluidics’ fabrication cost about $1000 but with SLA 3D printers, we can print the same device for about $2.50, and it’s more user-friendly."

Because only a tiny amount of fluid is needed, microfluidics devices enable precise and controlled experiments that are done quickly and at relatively low cost.

“This technology is so efficient because it enables rapid design and prototyping, automated digital modelling, and printing with fast chemical reaction times,” Ms Ganjalinia said.

If successful, the technology could cut costs and increase accuracy for any extremely precise manufacturing work, such as mechanical, electronic and software design.

The research is co-funded by the Australian Research Council and Taiwanese company Young Optics. This company has a particular interest in using 3D-printed microfluidics devices to make optical components manufacturing - including glass lenses - much more efficient.

The devices could also be used to support real-time environmental testing for industries such as mining and agriculture, and even point of care tests for infectious diseases.

A microfluidics device is so versatile it’s like a tiny laboratory on a chip. 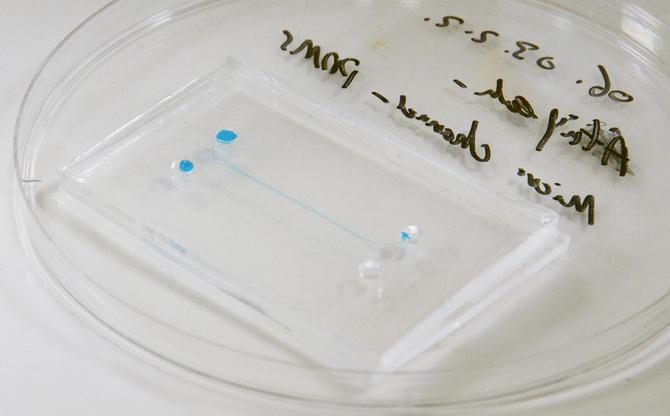 Improving the prototype with chemistry

Overflowing with potential, the device still has a few problems that only chemistry can solve.

“I am figuring out how to consistently print microfluidics devices with fluid channels that are less than 50 micrometres (µm) deep, thinner than a human hair,” Ms Ganjalinia said.

“Printing anything less than 50 micrometres in resolution is very challenging.”

The microfluidics device, including its micron-sized features, are printed by a stereolithography (SLA) 3D printer. The 3D printer has a UV light at specific wavelength which solidifies the photo-curable resin through a ‘photopolymerisation reaction’.

Other researchers have reduced the resolution to a miniscule 20 micrometres by adding additives such as photo-blockers and photo-inhibitors to the resin formulation. This complex mix of chemistry stops the resin overcuring by blocking the light.

The problem is that additives sacrifice the transparency of the final product and the compatibility with certain biological liquids.

“The device needs to be transparent so whatever is within the medium can be clearly viewed with a microscope,” Ms Ganjalinia said.

“It also needs to be biocompatible for it to be useful in biomedical research.

“Our University of Tasmania team is working to make this happen because commercial-scale printing of microfluidics devices with a resolution of less than 40 micrometres could be game-changing.”