Share this
Related articles
Humans are aliens in the Antarctic landscape. We build stations to resist the extreme Antarctic forces and provide habitable environments to live and study. However, the stations impose a significant environmental footprint.

Kaelan Durbin, Master of Architecture student, grew up and studied in southern Tasmania. Early in his Schooling, he realised that he found joy in art, computer graphics, housing, and design. He wanted to stay close to home pursue his University studies.

Kaelan says: “I loved design, art and engineering through school, and found Architecture promised a good balance of these. I liked the Inveresk Architecture building and the hands-on component to the course, so that made my decision to study easy.”

During his time at Architecture and Design, there have been many highlights for Kaelan. These include hands-on elective opportunities, truss making, breaking and testing materials, and the Species Hotel project.

My two favourite projects were both electives: the Vietnam bamboo study tour and Learning by making. The opportunity to do some do some study overseas was fantastic, and learning about bamboo, vernacular construction techniques and vernacular design.

For Kaelan’s final Master of Architecture Project, his vision was to see how the Antarctic environment can inform a new type of research station. This would challenge existing sedentary infrastructure and minimise the environmental footprint of scientific activities in the antarctic. Kaelan at the Institute of Architects in front of his work “Aeolian”.

“The Antarctic icescape is ever changing, sculpted by the katabatic winds, which are generated by cold air flowing from the elevated polar interior down the coast. These winds create, as well as erode, forms in the icescape. The interaction between wind and ice, forms the natural icescape that determines the geophysical presence of the continent, a truly aeolian icescape of the wind.”

Based on the wind, his kite-driven field station resulted in a speculative design and was awarded the Barry McNeil student prize for 2020. The prize was awarded at an event at the Tasmanian Chapter of the Institute of Architects in Hobart, along with the work being exhibited in the Lantern Gallery, Architecture and Design Buidling, Inveresk.

Due to the COVID restrictions, the exhibitions and presentations were some of the first opportunities where students were exposed to other students’ work outside of their individual studio stream. So it was great to see the differing projects and styles from everyone, and to have a chat about each other’s work. 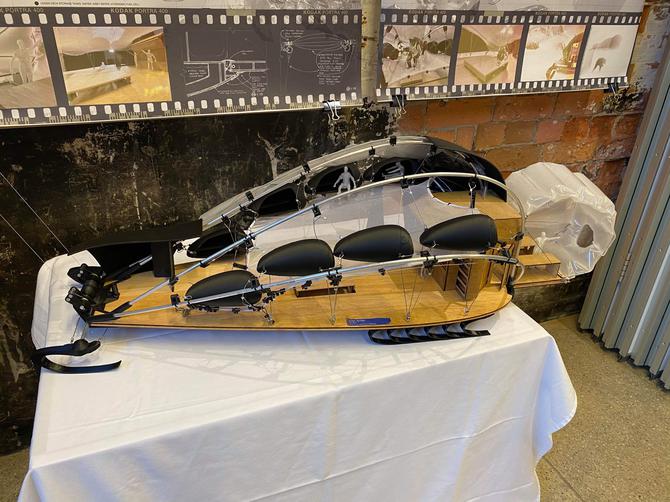 A nomadic, kite-driven field station that navigates the circulatory katabatic winds of the continent in an effort to reduce human footprint whilst achieving research goals.

Kaelan says the event was a great opportunity to meet new people from the industry. He was also able to appreciate Barry McNeil’s legacy and influence on local industry, with many people sharing personal stories and memories.

Kaelan is hoping that by receiving this prize, it will give him greater career opportunities, spark new connections in local architecture firms, and perhaps someday lead to a collaboration with the Australian Antarctic Division.