Clearfelling increases fire risk, but not all native forestry is bad

The type and age of forests are only part of the story when it comes to megafire risk.

Old growth TWEF store more carbon than any other forests,  and are important to the timber industry.  They are of high conservation value and form picturesque backdrops to many landscapes, including those surrounding the city of Hobart.

The relationship between TWEF and fire is complicated. Fire is an integral part of the life cycle of TWEF, as eucalypts require fire to regenerate.  TWEF share the same ecological and climatic niche as rainforests (rainforest trees often occupy TWEF understoreys).  Accordingly, they are typically not dry enough to burn, so bushfire occur infrequently (> 50 years).  The fire risk to forests is strongly influenced by fire weather: under extreme fire weather condition all forests ages will burn severely. Concerningly, there is evidence that the incidence of lightning-ignited fire increasing due to climate change.

Harvesting  of these forests has been a topic of much debate. Regeneration of logged TWEF uses intense fires to mimic bushfires that initiate natural regeneration. This involves clearing all trees, burning debris, and sowing seeds of eucalypt trees native to the area. This so called ‘clearfell-burn-sow’ practice has proved controversial, especially when it relates to fire danger and biodiversity. 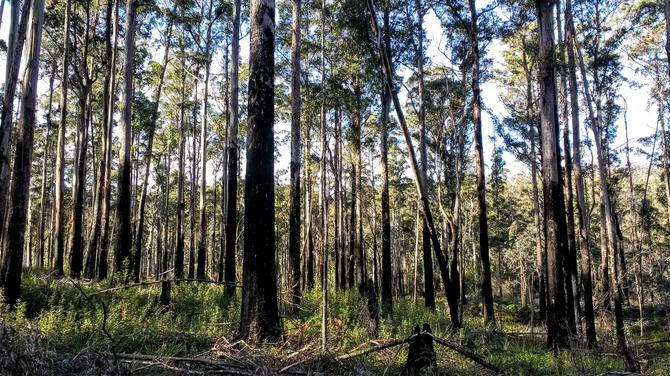 Some have argued that compared with mature forest, recently clearfelled TWEF have less fuel moisture, with dense canopies of regrowth that are close to the ground, with a greater risk of severe fire. In forests that are killed by canopy fire, and rely the trees on seed to regenerate, this can lead to landscape-level ecosystem collapse. Others have argued that the dense regeneration post-clearfell renders the forest floor moister and fuels less hazardous, and that clearfelled stands are less likely to burn due to low fuel loads. Indeed, the only consistent research theme to emerge from the past few decades is that there is no scientific consensus on the effects of clearfelling on fire risk.

Most studies on forest-fire risk following logging have been based on interpretation of remote sensing data (i.e. satellite data or aerial photography) with very limited field checking and empirical observations, particularly in Tasmanian forests.  To fill this gap, we developed the first study, published last week, that estimated fire risk in Tasmanian TWEF across a range of ages.

In what is known as a chronosequence (a series of permanent, long-term ecological research sites across four different age classes of forest), we measured fuel load (the amount of burnable material in the forest), fuel structure (how well connected that material is), and measured understorey microclimate (which affects how easily the forest ignites). We then used simple fire behaviour models to assess the fire risk in each of the four age classes of the forest.

What we found was that young regenerating forests, which were full of saplings, had a dry microclimate and a low canopy stature that made destructive crown fires much more likely, whereas older forests had a lush, moist, rainforest understorey and a tall canopy. This meant that fires in older forests, when they occurred, were more likely to remain in the understorey. However, our results also indicated that, if fire weather becomes extreme enough to allow for even the lush rainforest understorey to ignite, crown fires become more likely than understorey fires, even in old growth forests.  Therefore, under dangerous fire weather the difference in fire risk among forest age classes is minimised, creating the potential for megafires, as occurred in 2019-20.

A similar study  we published in April indicated that climate change is likely to increase fire risk in Tasmanian TWEF. Further climate change will increase dangerous fire weather in Tasmania, and will likely make the kind of drought that allows rainforest to ignite more frequent. Both of our studies underscored that, under such extreme fire weather, dense understoreys including rainforest trees can act as ‘ladder fuels’ when they combust, carrying fire into the canopy.  So, management (including removal) of these understorey trees could be critical in managing fire risk in Tasmanian TWEF.

Our study offers some interesting insights into the sustainable management of TWEF. When young forests burn before they are old enough to produce seeds, the result is ecologically catastrophic. Our results suggest that concentrated clearfelling in small areas could potentially increase landscape-scale flammability and lead to loss forests without restoration programs.

Plantations are often touted as an alternative to native forestry. However, because plantations are densely packed with trees and have heavy fuel loads, they are just as vulnerable to fire damage as young stands regenerating after clearfelling.

Our research does not necessarily mean that all native forestry is bad, and that there is no place for forest management in sustaining forests as the climate warms. Management techniques focusing on thinning and removal of forest understorey are well-developed in North America to reduce fire risk. There is increasing interest in applying these principles to Australian native forests, which could lead to the replacement of traditional clearfell-burn-sow silviculture with partial cutting and thinning to build resilience in native forests. An important social dimension of these approaches are creating employment in the forestry sector while restoring important ecological processes, building bushfire-fighting capacity in rural communities, and possibly creating pathways for Indigenous communities to participate in forest management. 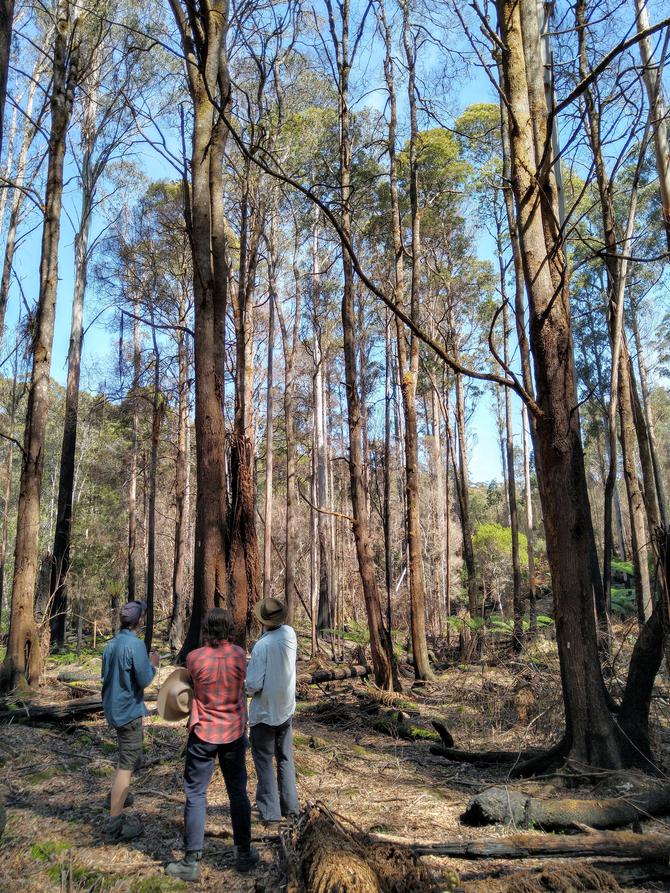 Already, the Tasmanian forest industry has taken in important first step in implementing new management techniques, developing and implementing variable retention harvesting, which leaves ‘islands’ of unlogged forests. This technique helps maintain a ‘multi-aged’ stand structure and retaining some of the moist understorey. Further, techniques involving thinning of regrowth forests to improve productivioty and fire resilience are now implemented in parts of the state. Currently the Fire Centre Research Hub at the University of Tasmania is working with the City of Hobart on a project trialling the use of understorey thinning in TWEF on the outskirts of Hobart to reduce fuel loads. However more research and evaluation needs to be done to move away from clearfelling, and evaluate understory thinning to manage fire hazards.

Our paper is not the last word in the complex topic. More research, including trials and evaluation involving targeted partial logging, thinning and burning are required to find sustainable ways to build resilience into Tasmanian forests as they are further stressed by climate change.

This series of research papers investigating the fire regime of TWEF was published in the journal Forest Ecology and Management and the Journal of Ecology.