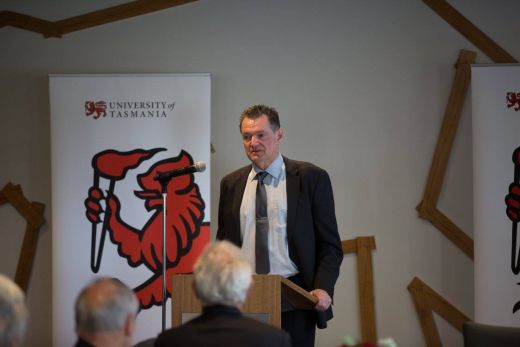 Earlier this year alumnus David Warren made a $2.6 million gift to the University of Tasmania. The largest single private gift in the University’s history, it has enabled this institution to endow a $5m chair in the field of astrophysics, a lifelong passion for Dr Warren.

In introducing Dr Warren, the guest speaker at a recent 40+ Club luncheon at the University Club in Sandy Bay, the Executive Director, Young Dawkins, explained:

“An endowed chair virtually guarantees that a university will be able to attract an internationally recognised leader of their field, and they bring with them enormous academic and scholarly prestige, great reputational impact within the academic community internationally, and a clear position of leadership.

“Dr David Warren grew up in Launceston where his dad painted the white lines on highways. He graduated from the University of Tasmania in 1979 with a Bachelor of Science degree, and he has never looked back … There are many definitions of the word I’m about to use, but to my mind David Warren is a hero.”

In his speech Dr Warren detailed his motivation: “When I was thinking about this (gift) I had a look at endowed chairs around the world, and for me as a scientist the most iconic would be Cambridge’s Lucasian Chairs. Henry Lucas died 350 years ago and left his money to the university … They’ve managed this money ever since for centuries and there’s now a raft of these Lucasian Chairs.

“Once you endow a chair it’s no longer subject to the vagaries of the annual budget, it’s there for good and you have the possibility of attracting and appointing some very big names. The greatest of the Lucasian Chairs was Isaac Newton, and then more recently there is Stephen Hawking.

“We need to establish our own traditions of endowed chairs here at the University of Tasmania. What I was hoping to do with this chair is to lead the way. It’s to change state from no chairs to one chair and then lead the way and show everybody that if you’re interested in something, enthusiastic about something, you don't have to wait for someone else to do it, you can do it yourself,” Dr Warren said.

“It has already been successful. There have been approaches from people who want to support the University financially that I think we might not have got if we hadn’t been able to demonstrate our ability to establish a permanently endowed chair. Changing state from none to one which is the most important change.”

Dr Warren concluded his address by inviting others to follow his lead: “For me it was a fairly easy choice, but it is a choice. None of us have spare money, we’ve all got a certain resource and we’ve got a list of things we want to do which exceeds the amount of money we’ve got - that’s normal. So it is a case of making choices. I think it’s important for all of us, the people who’ve benefited most from this university, to consider what our choices might be in the future.”