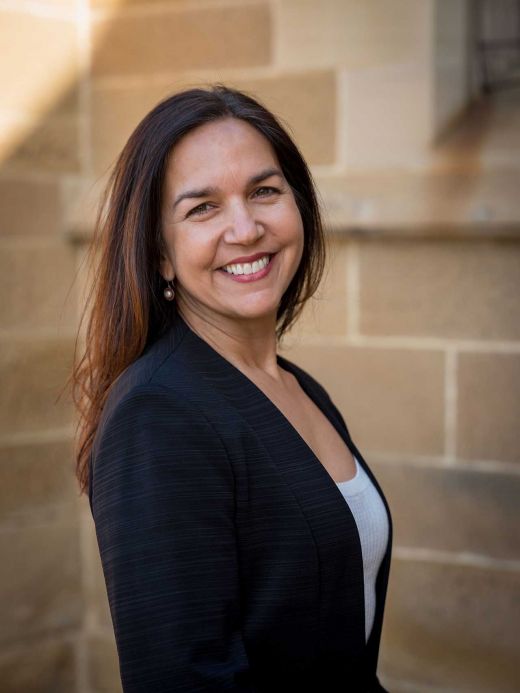 Alumna Lisa Singh (BA Hons 1996) served as an Australian Senator, a Tasmanian Member of Parliament and as a Minister in the Tasmanian Government.

Lisa’s career has been defined by service and advocacy, particularly for some of the most vulnerable groups, from those within our Tasmanian community, to the rights of migrants and refugees more globally.

We spoke to Lisa about her role as the Head of Government Advocacy, Australia-Pacific at the Walk Free Foundation, an international human rights organisation working to end modern slavery, which is an initiative of the Minderoo Foundation.

What is modern slavery?

“On any given day, tens of millions of people throughout the world are being exploited through force, fraud or coercion. In fact, the exploitation of people remains one of the most pervasive human rights abuses on the planet.

It is an affront to human dignity and takes away a human being’s freedom and opportunity to live a decent life.

Countries use differing terminologies to describe modern forms of slavery. This includes how they describe slavery itself, but also other concepts such as human trafficking, forced labour, debt bondage, forced marriage, and the sale and exploitation of children.

Walk Free uses ‘modern slavery’ as an umbrella term that focuses attention on the commonalities across these concepts. Essentially, it refers to situations of exploitation that a person cannot refuse or leave because of threats, violence, coercion, deception, abuse of power, or deception.”

The Walk Free Foundation publishes The Global Slavery Index. How does Australia rate and what are some of the specific challenges it needs to address?

“The 2018 Global Slavery Index (produced by Walk Free) estimates there are 15,000 people living in conditions of modern slavery in Australia on any given day in 2016.

In the 2019-2020 financial year, the Australian Federal Police received nearly one hundred reports of forced marriage. This is a growing concern that requires a greater focus and understanding of this form of exploitation in Australia.

There is a clear need for Australia to address the vulnerability of migrants to exploitation to strengthen its modern slavery response.

The 2018 Global Slavery Index also finds that Australia imports US$12 billion worth of products that are at risk of being produced with modern slavery, including electronics, garments, seafood, rice and cocoa products that are sourced from high-risk countries.”

Modern slavery is a large, complex and global challenge, at the moment the world is grappling with COVID-19. How do you achieve cut through at a time like this and has the pandemic impacted on modern slavery? If so, how?

“No doubt the pandemic has thrown challenges and risks for thousands of Australian businesses, but we must not lose sight of the risks carried by those most vulnerable and how we are connected to them – like the women at the end of chain who make our clothes. They have been denied wages and protections and have been left stranded in the source countries of the goods we purchase in Australian stores every day.

The economic and social impacts of COVID-19 has had devastating impacts for vulnerable people around the world. It has exacerbated poverty, inequality, and a lack of opportunities for decent work. These factors not only increase the vulnerability to modern slavery, but also exacerbate the ‘push factors’ that lead to increased irregular migration, fuelling smuggling and trafficking crimes.

For women and girls already in situations of exploitation, COVID-19 has made bad situations worse. Migrant domestic workers face further restrictions to their mobility and heightened threat of physical and sexual abuse, as they are forced into lockdown with their employers. School closures put girls at risk of permanent removal from education, and increase the risk of sexual exploitation, female genital mutilation, and early marriage.

It has starkly illustrated what happens when we fail to safeguard the human rights of the most vulnerable.

Our advocacy calls on governments to rethink the systems and structures that have created these risks and to address these gaps in protection of workers to ensure that every person is free from exploitation. “

Is there anything that can be done at an individual level?

“Inform yourself about what modern slavery is, what it looks like, and where it occurs is an important first step to contribute to the anti-slavery movement. From there, you can champion accountability by raising awareness at your school, university, or place of worship, by strengthening human rights standards in your own workplace’s supply chains, and by voting for government leaders that will prioritise modern slavery.

Individuals, as consumers, can also demand transparency from businesses and brands by asking ‘what are the working conditions for the people who made my clothes’? Finding out what businesses are doing to ensure exploitation is not occurring within their operations or supply chains to make an informed decision about your purchase. Where it is not clear, or where business efforts are not good enough, we suggest reaching out to the business and ask what they are doing.

Individuals can also support the frontline by donating to existing initiatives, projects, or organisations, particularly those which are community or survivor led.”

I understand that you are working with the University of Tasmania which is developing a statement to help identify and address the risk of modern slavery in University supply chains and operations. How can actions like this help?

“I recently met with the University’s compliance team and offered advice. It is developing its modern slavery statement in compliance with legislation.

It is great to see my alma mater taking its supply chain reporting on human rights and sustainability seriously.

Our universities can play an important role in driving change to end slavery. The impact of modern slavery is often hidden in plain sight. Universities often do not know what modern slavery looks like or just how susceptible their own supply chains are to it.”