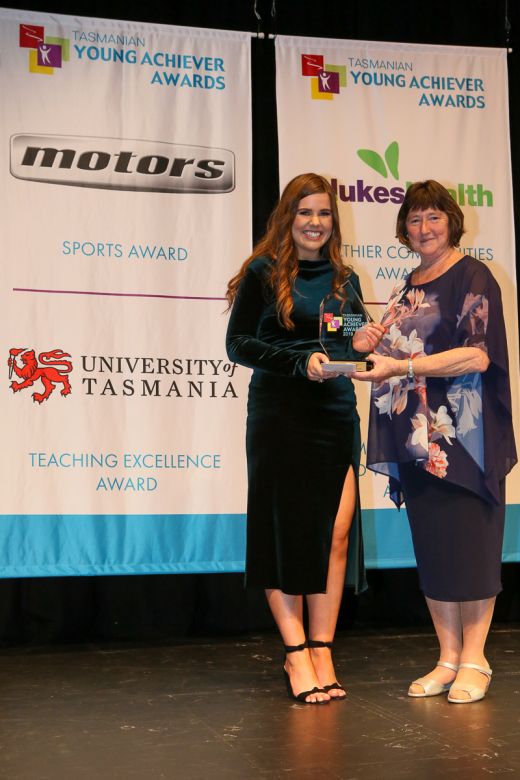 Current and former University of Tasmania students have featured prominently in the Awards Australia Young Achiever Awards for 2019.

Three University of Tasmania alumni and a current student were acknowledged in the Awards which aim to encourage and promote the positive achievements of all young people throughout Australia up to and including 29 years of age.

The Premier’s Young Achiever of the Year Award was won by UTAS student Matthew Etherington of Sandy Bay. He received the Award from Premier Will Hodgman at a gala dinner at Wrest Point on 31 May for his work improving the lives of the disadvantaged through exercise.

The awards have been presented in all states and territories since 1989.

Ms Birchall was presented with the University of Tasmania, Faculty of Education teaching Excellence Award by the Dean of Education Professor Karen Swabey.

Mr Etherington, 23, of Hobart is committed to helping the disabled and disadvantaged in the community through sport and physical activity. He is involved with the Big Issue Community Street Soccer Program. He organised a Mental Health First Aid Initiative at UTAS to prepare over 330 students to exercise self-care, promote mental health and encourage peer support.

Grace Birchall, 24, of Shearwater is a teacher of English, Geography and Dance. She was based at the Ulverstone High School at the time of the award but now teaches at Taroona High School. She taught dancing outside normal class schedules and coordinated song and dance performances in a community theatre. At weekends she taught people with Down Syndrome at the Bright Stars Troupe, helping to release their inhibitions and perform at community functions.

Elias Solis, 29, of New Town has been a major force in the establishment of a Latin culture in Hobart.

The son of Chilean emigrant parents Elias established the Yambu café, a vibrant home for Latin American food, culture and music. He has also been the producer, leader, musical director or key player in Latin American bands. Elias organised workshops in percussion and hosted Spanish language classes and organised fundraising events for study tours to Cuba for young Tasmanians.

Zac Romagnoli-Townsend, 25 of Nubeena advocates for climate justice through the Seed Indigenous Youth Climate Justice Network where he is a coordinator. A Mutwintje man, Zac coordinates ten young Aboriginal and Torres Strait Islander volunteers and collaborates with the local Australian Youth Climate Coalition. His passion is to prevent mining of new fossil fuels through speaking at workshops and grassroots community organisations.

In all there were nine categories in the Tasmanian Young Achiever Awards.