Alumni and staff singled out for excellence in storytelling 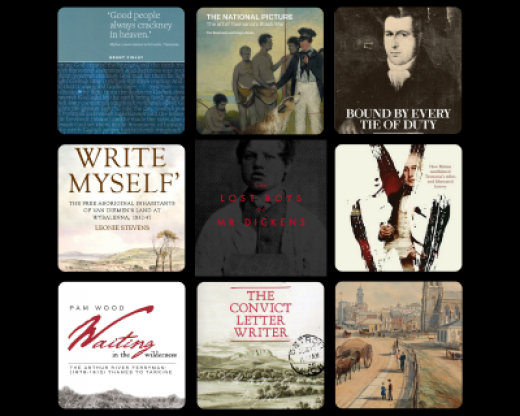 Tasmanian authors have demonstrated their breadth of talent when it comes to telling the stories of our place, dominating the longlist for the State’s most prestigious history book prize.

Nine books have made the longlist for the State’s most significant book prize, the Dick and Joan Green Family Award for Tasmanian History.

Of those, six were either University of Tasmania alumni, or current or former staff. This includes a book co-authored by the University’s Pro Vice-Chancellor Aboriginal Leadership Professor Greg Lehman.

The $25,000 biennial award recognises high-quality published works that make a significant contribution to our understanding of Tasmania’s past and seeks to celebrate books on the island’s history and cultural heritage.

Among the works recognised are two stories about Tasmania’s Black War, the first whitefeller ferryman on the Arthur River by former West Coast author Pam Wood and the plight of child prisoners sent to Van Diemen’s Land by a former editor-in-chief of The Age and Herald Sun, Steve Harris.

The full longlist can be found here.

Chair of the award’s judging panel and Executive Dean of the College of Arts, Law and Education at the University of Tasmania, Professor Kate Darian-Smith, said a depth and richness of scholarship shone through from the entries.

“We are seeing a wonderful vibrancy and diversity in books about Tasmanian history and heritage, with some finely produced books by a range of publishers,” Professor Darian-Smith said.

“This level of interest in telling stories of our place, its people and communities indicates the richness of Tasmanian history, not just for local readers but in contributing to Australia’s development and place in the world.”

The award was set up to commemorate and celebrate the contribution Joan Green, and her late husband, Dick made to Tasmania.

Both from Launceston, the Greens were key players in the establishment of the National Trust and have been strong supporters of the arts and many community organisations.

Dick Green was a former alderman and Mayor of Launceston and served on various boards, while Joan Green was a champion golfer and, for more than 50 years, has contributed to a variety of organisations.

Speaking on behalf of the Green family, Caroline Johnston, one of Dick and Joan’s daughters, said:

“The family is pleased to see the announcement of the longlist with such a diverse range of people and their stories from Tasmania’s past.”

The shortlist for the award, which is managed by the University of Tasmania, will be announced in May 2020, with the winner revealed in June.

More information can be found on the University of Tasmania or the Green Family Award websites.