Alumni Explainer: All the colours of the rainbow 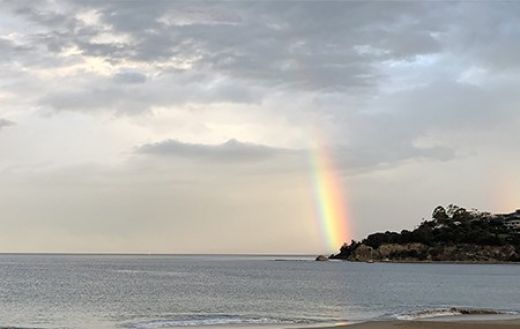 Are there more rainbows in Tasmania than the rest of Australia? We asked one of the island’s best-known meteorologists Distinguished Alumnus Dr Mike Pook (GradDip ASOS Hons 1990, PhD 1995).

To answer the question, first it’s important to understand what makes a rainbow.

Rainbows are only seen when the sun has a suitable elevation above the horizon and is located behind the observer.

Rays from the sun shine into raindrops falling in front of the observer and are refracted as they pass through the droplet surface and reflected from the back of the raindrop.

The eye will see the arc of the rainbow where the reflected rays make an angle of about 42 degrees from the direction of the sun’s rays.

Because the raindrops act in a similar manner to prisms, the paths of rays returning to the eye are slightly different for each wavelength or colour.

A rainbow shows up as a spectrum of light, ordered from longest to shortest, red to violet.

They are an extraordinary meteorological phenomenon.

One of the most magical aspects is that you can have two people standing side-by-side and they will both see the rainbow differently.

That’s because it’s an optical illusion that doesn’t exist at one point in the sky.

There are so many variables that change the appearance of the rainbow, for instance, raindrops of different sizes are constantly falling, and the angle of the sun depends on where the person is standing and how their eyes process the light.

That’s also one of the problems with trying to keep track of this transitory phenomenon over time.

While there is no official rainbow record keeping, Tasmania is one of the best places to see rainbows because it is situated at the optimal latitude and has the right combination of sunshine, rain and clouds.

It makes sense that in a place like Tasmania you see more rainbows than somewhere like the Northern Territory.

The reason for this is that as you get closer to the equator, the sun sits too high in the sky. That’s why rainbows are more uncommon in the middle of the day.

Tasmania also tends to get the right sort of low hanging sun, showery rain and cloud formations that allow sun to shine through, such as cumulus clouds.

The appearance of rainbows, most commonly in Spring and Autumn, may also be heightened in Tasmania because of its clean, clear skies.