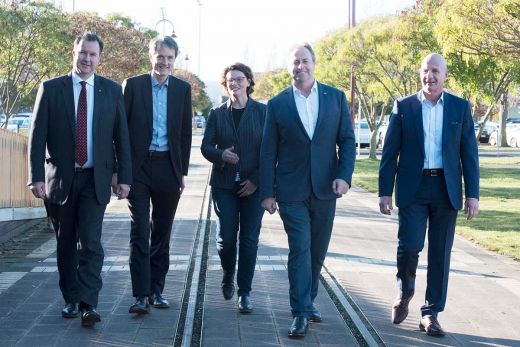 Tasmanian architects who studied at the University of Tasmania are key members of the talented team that will design new campuses as part of the $300 million Northern Transformation project.

The internationally renowned John Wardle Architects (JWA) is the principal consultant for the project and will partner with three Tasmanian practices founded and run by University of Tasmania alumni: 1+2 Architecture, Philp Lighton Architects and Room11.

Theirs is a partnership that will see new campuses built at West Park in Burnie and Inveresk in Launceston in a collaboration between the University and local, state and federal governments.

For the University alumni, being able to help shape the breeding ground for future budding architects is a humble experience.

“The University of Tasmania provided a sense of wonder about the world and resulted in us working and travelling overseas, before we were able to bring all those international experiences back to Tasmania,” 1+2 Architecture founding director Cath Hall said.

“Tasmania is the best place in the world. When I took off as a graduate, I truly thought I’d find somewhere to put down my roots, but I didn’t find that place. It made me realise how wonderful Tasmania is.”

Fellow founding director Mike Verdouw agreed, adding that while the graduate trio, which includes founding director Fred Ward, weaved in and out of each other’s lives across the globe, it was the pull back to Tasmania that resulted in the beginning of their Hobart-based firm 16 years ago.

“There’s such a richness of culture and history in Tasmania. The University provided a place, and the people – the practitioners and artists through the adjacent Arts School – that all three of us were able to connect with,” Mr Verdouw said.

“In our second year, we had the honour of renowned Australian landscape painter Lloyd Rees sitting with us and talking about ‘light’ for an hour and a half – it was a beautiful and memorable experience.”

Thomas Bailey is one of the founding directors of Room11, a practice known internationally for its refined residential architecture and public architecture such as GASP! (the Glenorchy Art and Sculpture Park), which won national awards.

Growing up in small towns in rural Tasmania left its mark on Mr Bailey, who was fascinated by rudimentary buildings in the extraordinary Tasmanian light.

“I developed a deep affection for buildings. I wondered about their thoughts,” he said.

During his days as a University of Tasmania student, Mr Bailey combined his tertiary education with weekends walking in the state’s wild places.

“Tasmanian architecture has always hit well above our weight and continues to do so. I think this is to do with discernment and sincere engagement with place,” he said.

Room11 was one of only two Australian practices invited to exhibit at the International Architecture Biennale in Venice this year (The other was John Wardle Architects).

“The camera starts in the landscape and pans backward to reveal the architecture. It evokes our work as it is: embedded in the superlative Tasmanian landscape,” Mr Bailey said.

Hobart and Launceston-based firm Philp Lighton Architects is a commercial practice that has designed public buildings across Tasmania, from school and university buildings to hospital and stadium developments.

Co-director Andrew Floyd had architecture in his blood, but it was his experiences with the University of Tasmania’s Bachelor of Arts in Environmental Design that cemented his career path.

“My father was an architect, and he came to Tasmania in 1952 to design a new Royal Hobart Hospital with our firm’s founding director Colin Philp,” Mr Floyd said.

“So I grew up with architecture but wasn’t sure I wanted to be an architect. I was lucky the University of Tasmania offered the course, and for the people and experiences I was exposed to.”

His father went on to become
one of the firm’s directors, and today three generations of architects have worked at the firm. Mr Floyd’s son – and colleague – Thomas is also a proud alumnus and was one of the first students to use the School of Architecture and Design when it relocated to Inveresk in Launceston.

“Architecture is as much about people and experiences with people as it is about buildings,” Mr Floyd said.

“As architects, we’re really lucky. We’re the people that can translate peoples’ dreams and ideas into reality.”

The Melbourne-based practice worked with the University to design the Institute for Marine and Antarctic Studies on Hobart’s waterfront, and John’s property on Bruny Island is home to two projects – the Shearers Quarters and Captain Kelly’s Cottage – that have won major architectural prizes at the state, national and international level.

JWA has collaborated with both Room11 and 1+2 Architecture on major projects in the past. With Room11, they put together a proposal for the redevelopment of Flinders Street Station in Melbourne, and with 1+2 Architecture, they developed the master plan for Macquarie Point in Hobart.

“We look forward to working with the communities in the North and the North-West as we develop ideas that will identify these campuses as vibrant student environments, with a strong sense of place, and that are intimately connected to the landscape that surrounds them,” Mr Wardle said.