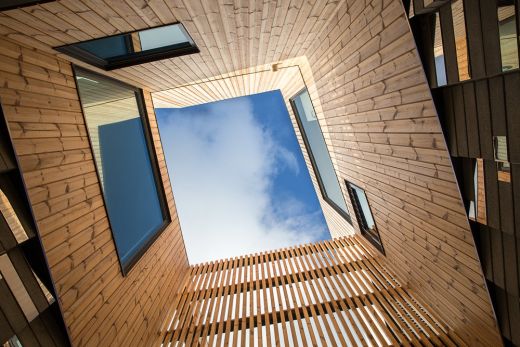 It comes as no surprise that University of Tasmania alumni reigned in the awards at the 2017 Tasmanian Architecture Awards – after all, they’ve been making national headlines and taking out national awards for years now.

And with Tasmania’s growing international reputation as an architectural hub, and a unique array of landscapes and architecture to play with – it only makes sense that some of our finest graduates remain designing close to home.

The awards, conducted by the Tasmanian chapter of the Australian Institute of Architect’s, were presented recently in a ceremony at St David’s Cathedral, Hobart, in recognition of outstanding architectural achievements within Tasmania.

The 2017 awards program attracted 28 entries, a record number, with emerging architecture practices dominating the entrants and winners this year.

Core Collective Architects took home three awards for their Sunnybanks House at Middleton on the D’Entrecasteaux Channel, including an award for New Houses, Steel Architecture and Sustainable Architecture.

The project consisted of lead architect Ryan Strating and alumni Chris Clinton (BArch Hons 1999), Emily Ouston (BEnvDes 2005) and Dr Ceridwen Owen (DipLang 2010), the Senior Lecturer and Deputy Head of the School of Architecture and Design at the University of Tasmania.

Taylor and Hinds, directed by alumni Poppy Taylor (BArch Hons 2006) and Mat Hinds (BArch Hons 2006), won the pinnacle Esmond Dormey Award for Residential Architecture for their work on Cross House at Franklin, and the Edith Emery Award for Residential Architecture (Alterations and Additions) for the Longview Avenue Garden Room.

Room 11 collected a swag of prizes for their work on Shambles Brewery, including the Residential and Commercial Architecture Awards, and the new Barry McNeil Award for Sustainable Architecture. The creative brains behind Room 11 include alumni Nathan Crump (BEnvDes 1999), Megan Baynes (BArch Hons 2004) and director Thomas Bailey (BArchHons 2004), who was also awarded the 2017 Emerging Architect Prize.

The Sydney Blyth Award for Education Architecture was awarded to Cumulus Studio for their work on the Lady Gowrie Integrated Centre for Children & Families.

Fifteen of their eighteen person team at Cumulus Studio are University of Tasmania alumni, including the four directors.

“Congratulations to all of the winners of the 2017 Tasmanian Architecture Awards,” said Kirsten Orr, the University’s Head of School and Architecture and Design and Deputy Dean of the Faculty of Science Engineering and Technology.

“This year’s predominance of University of Tasmania Architecture graduates is testament to our School’s distinctive and enduring tradition of hands on learning by making that underpins our students’ sophisticated exploration of material, form and structure.”

“It is great to see our graduates delivering outstanding buildings that creatively respond to today’s pressing challenges of environmental sustainability, social responsibility and the particularities of place.”

The Award’s jury chair, Genevieve Lilley said “Tasmanian architects, and their clients, are leaders in resourcefulness and authenticity - forever fashioning big ideas into pivotal buildings with modest budgets, and this is especially evident in the common-sense-craft presented at this year’s awards.”

The highly anticipated results of the People’s Choice Award, which considers all entries from all categories will be announced at the end of July.