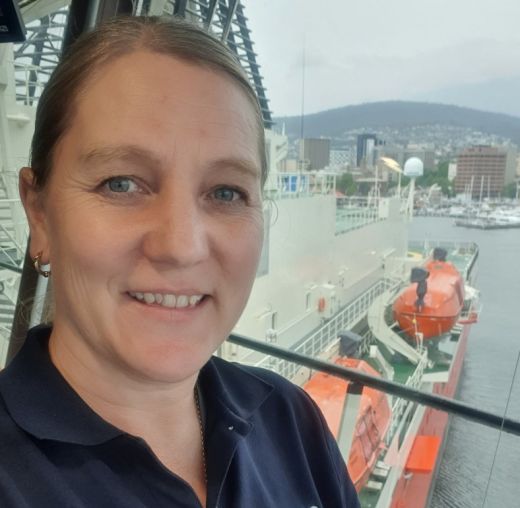 The decks and furnishings were covered and Katrina was one of a group of ship officers overseeing some of the final stages of the build.

Now she has joined the RSV Nuyina on its arrival in Hobart where she has taken up a position as Second Officer.

“It is nice to see her with all the covers off … to see her in all her glory,” Katrina said from the ship’s bridge.

The new icebreaker is capable of breaking 1.65-metre-thick ice at a continuous speed of 3 knots and handling waves over 14 metres. It will be the main lifeline to Australia’s Antarctic and sub-Antarctic research stations and the central platform of our Antarctic and Southern Ocean scientific research.

Other AMC former students on board the ship, which carries up to 149 people, include Chief Officer Henry Goodfellow (BAppSc (NS) 2016) and Third Officer Brett Cross.

The current crew are looking forward to taking the RSV Nuyina (nuyina means ‘southern lights’ in the Tasmanian Aboriginal language palawa kani) out for some ship familiarisation and training towards the end of the month before its first voyage south.

“We have people from the Australian Antarctic Division coming on board here in Hobart and, for a lot of them, they are seeing what they have been dreaming of for years coming to life,” Katrina said.

“It’s exciting seeing their dreams come true … it’s quite warming. It’s so important to their careers and lives and it’s what they are passionate about.”

Katrina has no shortage of passion either. “I’m definitely looking forward to going back down south. I just love the Antarctic experience – every time is memorable in its own way,” she said.

“I can still take a thousand photos in a trip.”

When asked for highlights, Katrina comments on the reflections you see from the ship in Antarctic waters, “You’d never realise there are so many shades of white.”

It has been a career journey too for Katrina, who started her maritime career as a Steward, including sailing as Chief Steward aboard Australia’s previous icebreaker the RSV Aurora Australis, where she later became a Deck Officer.

“I’ve gone from washing dishes and mopping the floors to driving the ships,” she said.

Katrina did all of her training through the AMC in Launceston.

“Experiencing icebreaking on a new advanced ship will be really exciting,” Katrina said.

“The size, capabilities and technology of this vessel are greater than the Aurora Australis … It is fitted with an Integrated Bridge System. There are no more paper charts.”

Katrina’s first Antarctic voyage aboard the RSV Nuyina will be in early 2022, Voyage 5 of the Antarctic season. It will be a multi-station resupply trip.

“We have a good mixture of experience on board with crew from various backgrounds including Antarctic and offshore operations.”

She is looking forward to being on board with the Nuyina crew, some of whom have never been to Antarctica before.

“You get to re-live that moment of seeing Antarctica again for the first time through them,” she said.


This article featured in the monthly eNews Alumni and Friends. If you are a member of the University of Tasmania community and would like to receive this publication, please provide or update your email address.