An epic journey to the edge of the earth 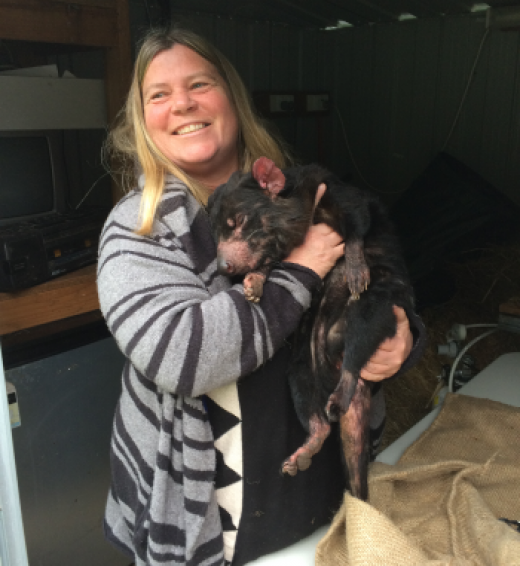 Alumna Ingrid Albion (BSc Hons1984, DipEd 1986) is one of 99 women selected to be part of a ground-breaking, 12 month leadership course that culminates in a trip to Antarctica.

The program aims to help women in STEMM raise their voices and visibility in these critical times of climate change. Ingrid is joining fellow Tasmanian Dr Clothilde Langlais, who is a physical oceanographer, science educator and nature lover on the journey to the frozen continent.

Can you please tell us about your career?

“For the past 20 years I have been a passionate wildlife conservationist and environmental educator. I have worked in many roles at the Department of Primary Industries, Parks, Water and Environment, mostly with Tasmania Parks and Wildlife Service, but also with Woodbridge Marine Discovery Centre and as a teacher in a variety of schools. I am currently the Manager of the Discovery Ranger Program.

What drives me is a desire to help people leave a legacy. Whether it’s training volunteers to rescue whales, developing breeding programs for devil insurance populations or mentoring discovery rangers, my programs are all legacy-focused.”

What does it mean to be legacy focused?

“It’s about having an eye to the future and using your knowledge, skills and experience to make a difference for the good of the planet, the wildlife and people. When I look at a graph of average temperatures in Australia for the past 100 years, it’s clear we are now living in times of consistently above average temperatures and this concerns me greatly for future generations.

When my parents were born it wasn’t a time of critical climate change. They used their knowledge, skills and passions to create legacies relevant to their era. My mum’s mother was born in England and only got to grade four before she had to go to work to support her siblings. This inspired mum to become a teacher and provide opportunities and be a role model for other women to make a place for themselves in the workforce.

My father worked in Maori health as a young doctor in New Zealand before he came to Australia to specialise in psychiatry. He spent decades working with Vietnam veterans and together with others he identified Post-Traumatic Stress Disorder.

When I think of my kids, they were all born at a time when temperatures have never been below average- a time of climate change- so now they are inspired to work in social justice or on environmental issues with climate change.

If you are going to have a legacy, you need to understand where you came from and what you are passionate about. I have always been passionate about animals. As a child my biggest moral quandary was whether the hundreds of snails I rescued every time it rained and set safely, but frustratingly free in my parent's wine cellar, should sometimes supplement the diet of some nestlings someone had rescued and brought to me to hand rear.

As a teenager my family moved to Warrnambool in Victoria. It was here I had my first whale encounter - it was magical. Her name was Wilma and she was a southern right whale and after decades post-whaling their numbers had increased enough that they were starting to be seen again along our coastline. Everyone was quite amazed, as at the time no one had ever seen a whale in Warrnambool. Nowadays you can travel there every winter and see the whales return on their winter calving migration. Back then it was rare because these whales had been hunted almost to extinction.

However, in the 1930s some people who were legacy-minded said we should stop whaling and their actions meant that I could stand there and see my first whale. And here in Tasmania, we see them, they are coming back because people have made a difference and created a legacy for us all. “

You have trained thousands of volunteers to rescue whales. Why?

“In Tasmania we get up to 80 per cent of Australia’s whale strandings. Like all marine biologists I want to be down there, hands on helping rescue them. One day I realised I could use what they call in Homeward Bound- the generosity principle. I could step back and use my knowledge, skills and passion to train a team of people on the beach how to rescue whales.

Instead of focussing on an individual whale, I could train people in best practice whale rescue - how to put a whole pod safely back to sea, minimising risks to both people and whales and training people for future rescues. By working together and developing a sustainable training program we can save more whales.”

How does it feel to be selected to go to Antarctica?

“Journeying south was something I never imagined I would be doing!

I am not a fan of big seas, but this program is a huge opportunity to step up as a woman in STEMM and not only build my own leadership skills, but also provide mentoring and support for other women on environmental and social justice issues that are close to my heart.

Anyone I have ever met knows I love animals, particularly top order predators like Tasmanian devils, orca, dogs and raptors and I would do anything to protect them. When I realised the effect climate change is having on the animals, as well as people and the places I love, I knew I had to do something.

I will use this opportunity to educate and inspire people to act on climate change and grow my skills and networks for change.”

Tell us a little bit about what this incredible journey involves?

“The three-week trip to Antarctica is the culmination of 12 months of virtual meetings with the 99 other women in the Homeward Bound 4 cohort and numerous hours of developing our leadership, strategy, communications and science skills.

We start with a full on two days of conferencing to continue to build our skills in Ushuaia, Argentina before embarking on the ship. It’s classified as a symposium at sea. The aim is to bring together our shared STEMM knowledge, experiences, passions and learnings whilst immersed in one of the most beautiful, fragile, remote and climate-susceptible landscapes in the world.

Women are recognised as nurturers and collaborators and this is something homeward bound aspires to channel, recognising that we are stronger together. On the voyage I will collect climate stories that will be brought back and shared with other Tasmanians.”

Your website Tasmanian Climate Change Stories is like a ‘living library’ showing how climate change is affecting Tasmanians by giving them the platform to tell their tales. How did this idea come about?

“It started when my daughter rang me whilst I was up in the devil pens and told me a story that would change my life. She had been to Fiji and met with young people who showed her how storms caused by climate change were causing floods, loss of lives, homes and livelihoods. They showed her how their best strategy was to run up the hills to escape.

When she asked one girl what she worried most about climate change, this girl told her it was fires. The young girl explained how they had all heard about the fires in Australia earlier that year (2009) and everyone in Fiji stopped in the streets and cried for the Australians losing their lives, their livelihoods and their homes.

The Fijians were looking to us for support and help with the storms, but we hadn't even heard about them. We didn't stop in the streets and cry for the young people in Fiji losing their lives, homes and livelihoods.

It’s these First Nation communities who have often done the least to cause the damage who were the first to feel the effects and were being impacted the most.

“It was then I realised that it wasn’t just animals and the environment that needed a voice, it was people.”

I thought about what I could do. I knew I could use my ‘super powers’, including: interpretation skills, sharing stories and a love of legacy programs to help. We recognise that scientists have knowledge, but the general public can also see change - we call this citizen science and I was keen to collect some of these first-hand stories.

I went to a town in Norway and a fisherman told me how for centuries the cod have come in the dark of winter and the fisherman have caught them and dried them. This is something that has been happening for millennia. But he told me that now they no longer always arrive in January, instead they arrive in February so they don’t always have time to dry before the summer and the flies.

In Iceland a lady told me about how climate change means the krill and anchovies were getting further away so the puffin were finding it hard to find enough to feed up their babies - pufflings. So these pufflings don't have the strength to leave and fall down into the local town. The children of Vestmannaeyjar collect them in cardboard boxes and take them to the local marine centre where they weigh them and feed them up so when they are big enough they can send them on their way.

The idea of the website is to get people to collect stories about climate change and get everyone talking about it. I believe that sharing first-hand stories will help others connect, understand and act both locally and globally on this issue.”