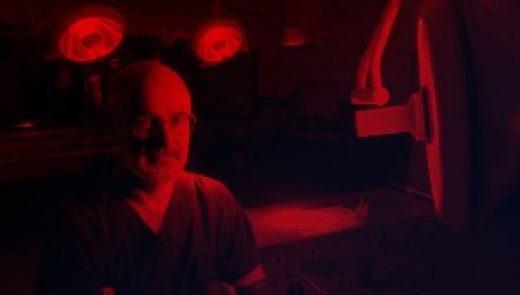 Professor Roger Byard may be one of the world’s leading experts in forensic pathology, but as an alumnus of the University of Tasmania he still gives back to the University, most recently gifting his time to present the Arthur Cobbold Memorial Lecture.

“I have always had very good memories of my time at UTAS and have been a donor to the university research activities for nearly ten years now.

“It had been my real wish to return to Hobart some time and take up a position with the University so that I could give back some of what the University has given to me.”

The annual lecture on contemporary medical issues was established by the University of Tasmania and Dr Elizabeth Cobbold as a memorial to Arthur Cobbold’s contribution to the School of Medicine, and to medical education.  Emeritus Professor Cobbold AM OBE died in December 2009 after a distinguished career in medical education. He was the Foundation Professor and Head of the Department of Physiology in the original Tasmanian School of Medicine and served as Dean of the School for a record 13 years.

A former pupil of Emeritus Professor Cobbold, Professor Byard was honoured to be invited to present the lecture and pay tribute to the work of his former teacher.

“I owe Prof Cobbold and UTAS a tremendous amount for starting me off in a career that I still find tremendously fulfilling.

“He was a truly inspirational character and mentor and it was wonderful to have Emeritus Professor Cobbold’s widow, Dr Elizabeth Cobbold, in the audience.”

Titled, Lessons from the Mortuary, the session explored the importance of learning from the dead, from a pathology perspective.

Professor Byard’s contribution to disaster victim identification and sudden infant and childhood death is world-leading and he used the lecture held at the Medical Science Precinct to discuss ‘How the dead can help the living’.

“Forensic pathology can clarify questions on current and historical cases,” he said.

“We are so frightened of death but there is no hiding from it.

“It is the one thing that we share; we hide from death and try to sanitise it and no-one wants to know about it,” Professor Byard told the audience.

“Forensic pathologists are the guardians of the dead and it is a very privileged position and one we take very seriously.”

Professor Byard spoke of the strange and unusual cases he’s been involved in, such as the infamous Snowtown ‘bodies in the barrels’ murders, and described the disaster identification process following the Bali bombings and Thai tsunami as two of the most difficult assignments of his career.

Professor Byard ended the lecture with a clear message for the audience: Enjoy life!