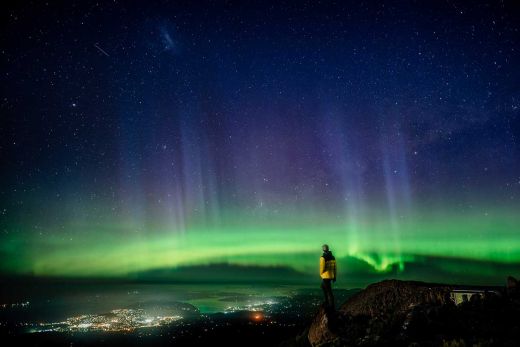 Tasmania’s unique location gives us a front-row seat to the greatest light show on earth – the Aurora Australis or Southern Lights.

The University of Tasmania’s Professor of Astrophysics and Head of Physics, Andrew Cole, looks to the stars to work out the ages, composition and formation of nearby galaxies. So naturally, he's become an expert on the subject.

The burning question, of course, is how best to spot an aurora. Andrew’s advice: “If you want to see an aurora from Hobart, the best way is to check the space weather forecast https://www.sws.bom.gov.au/Aurora and for clear skies to the south.”

“If the conditions are good (indicated by Aurora alerts), try to pick up a faint green tint above the southern horizon with a camera or smart phone," he said.

“If it is bright enough and the skies are dark enough, try to view it with the naked eye, or film it to capture the movement.”

Here he answers more questions about the phenomenon that we think will be of interest to you.

How would you explain the Aurora Australis to non-scientists?

Outer space is filled with electrically charged particles. When they hit the Earth’s atmosphere, they can make it light up like a fluorescent light tube. This tends to happen in the polar regions, where Earth’s magnetic field is trapping the charge.

What is really going on when the phenomenon occurs?

There’s a stream of protons and electrons from the sun moving past the Earth at several hundred kilometres per second. When electrons encounter the Earth’s magnetic field, they become trapped, moving along the field lines to the poles. The magnetic field funnels the electrons into the atmosphere in the polar regions and they strike atoms of oxygen or nitrogen molecules.

In the low-density upper atmosphere, the atoms only lose this energy by emitting light, which creates the glow you see. Green and red come from oxygen at different altitudes, and violet comes from nitrogen. There’s light in other colours as well, but the atomic physics and the eye’s sensitivity mean that red, green and violet are the colours we can see.

How can we give ourselves the best chance of seeing the aurora?

The best way to see the aurora is to look at the space weather forecast and go somewhere very dark, far from city lights. It’s strongest in a ring around the geomagnetic pole, so you’ll want to be as far south as possible. And you need to be patient. Like any weather phenomenon, forecasting is difficult, and the aurora can come and go without much warning.

Modern cameras are extremely sensitive, so it is unusual that you’ll see a brightly coloured display with the naked eye, even when long-exposure photos are showing the telltale green or red glow.

Try to pick up a faint green tint above the southern horizon with a camera or smart phone. If it is bright enough and the skies are dark enough, try to view it with the naked eye, or film it to capture the movement.

What makes Tasmania a great place to research in this area?

The Aurora Australis is an upper atmosphere space weather phenomenon, but also an Antarctic experience. Hobart is Australia’s Antarctic gateway, and the University of Tasmania has career paths in atmospheric and Antarctic studies leading to employers like the Australian Antarctic Division and CSIRO Research.

We have research students working on papers alongside people with access to telescopes all over the world. They’re analysing the findings from the University of Tasmania’s telescope and trying to find planets around other stars within our galaxy.

We’re very excited about NASA’s new James Webb space telescope. We have a couple of papers in the pipeline analysing the performance of the James Webb compared with the Hubble, sharing a few early results and theorising what else we can expect to find.

What got you interested in a career in astrophysics?

My interest in science goes back to when I was a kid. The Apollo moon landings had just happened, and the Voyager probes to Jupiter and Saturn were getting off the ground and returning the first pictures of the outer solar system.

Looking up at the stars in the night sky and seeing the images coming back from the space program always interested me. And it helped that the best lecturers I had were in the astronomy department.

The south geomagnetic pole is between Hobart and Antarctica, so even though Hobart’s at a geographic latitude of 43° south, we are geomagnetically much, much closer to the pole. That gives us a better view of phenomena like the Aurora Australis compared to somewhere like South Africa or South America.

The auroral colours, mainly green, red and sometimes violet, are due to oxygen and nitrogen. They can be observed in other situations, like above thunderstorms and in gaseous nebulae in deep space. We can use these colours to understand physical conditions like temperature and density of the glowing material.

The intensity (brightness) of the Aurora Australis is measured on the KP scale which ranges from 0-10. During intense periods of solar activity, the Aurora Australis gets brighter and moves toward the equator. Occasionally, I’ve seen the aurora to the north of my house in Hobart, instead of just to the south.

One alumnus with a keen interest in astrophysics is businessman, researcher and inventor Dr David Warren (BSc Hons 1981, Hon DSc 2008). Dr Warren studied astrophysics as a student at the University and is a strong supporter of education.

He enabled a professorship in astrophysics at the University, the first permanent Endowed Chair in the institution's 127-year history. The position was made possible through a $2.6 million gift made by Dr Warren with additional support of the University of Tasmania and its Foundation Board.

For a two-minute explainer on seeing auroras, see here.