Scholarships: A win for students, community and donor 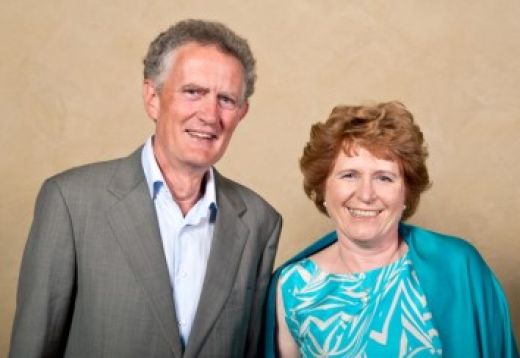 Well-respected northern businessman Brian Hartnett believes scholarships are not only positive experiences for the students, but for the community and donors.

Dr Hartnett has been a driving force at the University of Tasmania for decades, through research, sector input, mentoring, philanthropy and since 2014, the generous funding of a Bachelor of Applied Science Scholarship.

And giving back to the community is something that keeps this now retired-Launceston resident and his family busy and content.

“I very much believe in the value of education. It’s empowering for people to realise their potential and understand much more about the world around them,” Dr Hartnett said.

“We need more people interested in science, mathematics and engineering, in order to build prosperity in the future.”

Dr Hartnett’s scholarship is awarded to students in the north of the state, to help with a variety of costs, particularly living expenses.

“Scholarships are important from the student’s point of view, they really do need financial assistance to encourage them to pursue these educational opportunities,” he said.

“And they’re (scholarships) essential for community, because we need well-educated young people to contribute to our future growth and prosperity

“And for the donor it’s a good feeling to help these young people. I’m very inspired by them and it’s great to form collaboration with our youth.”

A fourth scholarship was established to mark Dr Hartnett’s retirement as Managing Director of the company: the Brian Hartnett Scholarship in Science Teaching.

Of all the students Dr Hartnett has supported financially and mentored, his first scholarship recipient will always be a memorable highlight.

“We often hear all doom and gloom about the young people of today, but I am very impressed by the students that I’ve met through the scholarship. They’re hard working, motivated and doing their best, it’s inspirational,” Dr Hartnett said.

“My first sponsor ended up with his honours teaching degree and is now a science teacher at Newstead College.

“He’s doing very well and it’s really nice to see he’s out there inspiring young people to get a good education and do well.”

With an impressive career, Dr Hartnett said his success is attributed to employing and working with clever people.

His CV includes Managing Director of Tasmanian Alkaloids Pty Ltd from 1996-2009, having held the positions of Operations Directors and Marketing Director since commencing work for the company in 1977.

He was also an integral member of the University of Tasmania’s Foundation board, which played a significant role in directing philanthropic efforts for the University.

In 2015, Dr Hartnett was awarded a degree of Doctor of Letters honoris causa by the University.

Despite being retired, Dr Hartnett still consults at Hartnett Consulting but enjoys travelling the globe for his passion of cycling.

He also plans to continue supporting what he regards as "his students".

"I receive more than I give from my scholarship support, the journey each student takes as they work towards completing their degree has been personally enriching for me and I would encourage others to be part of a student's story,” he said.