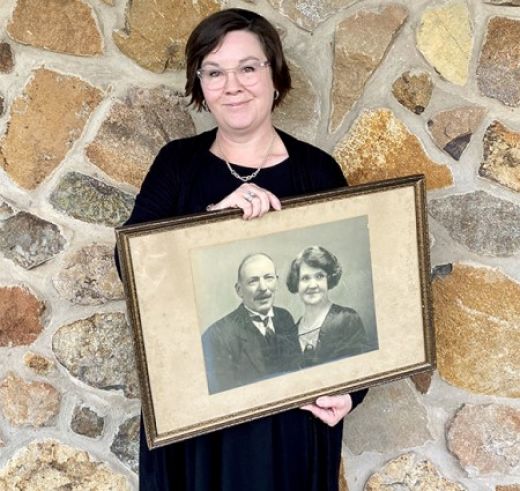 Mandy Wenn was scrolling social media when an image caught her eye.

Someone was selling old photographs and frames on Facebook and, in an incredible case of serendipity, the subjects of one of the photographs stared back at her with an eery familiarity.

There, in the online auction, was a photograph of her long-lost great grandparents, Emily and James Jones, taken more than a century ago.

The University of Tasmania alumna (BEd Hons 1999, GradCertEd 2018, DipFamHist 2019) was awestruck by this rather unlikely occurrence.

Mandy instantly recognised her relatives, as she had seen a smaller, damaged image that must have been taken during the same sitting.

“It was amazing,” she said.

“The seller had no idea where the photograph came from, he bought them in an auction.”

Not only did the photograph provide Mandy with a precious piece of her family history, after she featured on ABC radio and in The Examiner newspaper, her mother reconnected with her cousin after many years.

Two years ago Mandy completed a Diploma of Family History, which teaches students how to research, write and collate family history.

“The Diploma’s focus on using objects and photographs to look for clues, as well as using qualitative information, capturing stories and triangulating the data really honed my research skills.”

Mandy jokes that her interest in family history was sparked by a few rogues in the family. In fact, she later discovered she had around a dozen convicts in her ancestry.

The research skills she refined during the diploma also complemented her career as a teacher where she has partnered with places like the Port Arthur Historic Site Management Authority to develop digital tools for children and the Queen Victorian Museum and Art Gallery (QVMAG).

After 20 years of teaching in a classroom, Mandy took on a role with the Education Department where she now works as a Respectful Schools Support Team Leader.

“We're a team of 12 teachers around the state and we work with schools to build capacity in inclusive practice,” she said.

“We help schools remove the barriers to learning for a broad range of students. We help schools understand and meet students’ needs systemically and individually.“

“I work with schools like Mole Creek where there are 60 students right through to Launceston College, which has 1,500 students, and we deliver professional development and support to teachers and sometimes parents and the school communities.

“It’s also a very solution-focused position where we get to be creative.”

Learn more about the Diploma of Family History on the University of Tasmania website.