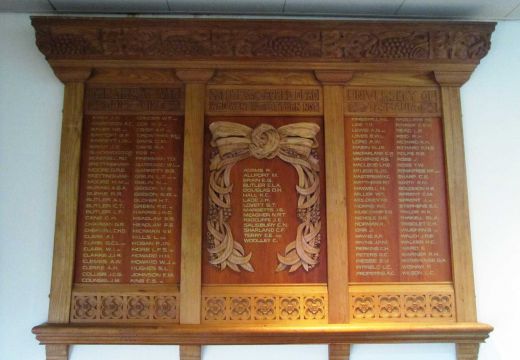 An honour board recognising University of Tasmania graduates, students and councillors who served in World War One, will be re-unveiled to the public on 8 November.

The University invites alumni and relatives of those memorialised on the honour board, and anyone with an interest in World War One, to attend this free event.

The event will also feature a lecture titled ‘From Academic Gown to Military Uniform: The University of Tasmania and World War One’, presented by Professor Stefan Petrow at 10.30am in the Law Lecture Theatre 2 (room 226).

Professor Petrow, who is completing a book on Tasmanian soldiers who served in infantry battalions in World War One entitled Tasmanian Anzacs, will provide insights into the war experiences of some of the soldiers whose names appear on the honour board.

Vice-Chancellor Professor Rufus Black will re-unveil the honour board, which was designed and made almost 100 years ago by celebrated Tasmanian woodcarver Ellen Nora Payne.

In 1919 the University of Tasmania’s Chancellor and the MLC for Buckingham Tetley Gant, wanted to ‘perpetuate the memory’ of the graduates, students and University Councillors who had served in World War One.

Trained in Tasmania and England, Mrs Payne felt a special affinity with Chancellor Gant’s idea as her husband Dr Charles Payne, and her two sons, had served in the war.

Mrs Payne also felt the loss of her favourite nephew, Sergeant Max Field, who was killed in Palestine.

Professor Petrow said the Honour Board was very much a labour of love.

“As centenary commemorations of Australian involvement in World War One are now drawing to an end, the University of Tasmania thinks it only fitting to remember the selfless contribution of the men and women whose names appear on Nora Payne’s sensitively carved Honour Board,” Professor Petrow said.

A final list of 125 names appeared on Chancellor Gant’s Honour Board and on 5 August 1924 a ceremony was held on the University’s Queen’s Domain campus when Sir John Gellibrand, the Tasmanian who reached the highest military rank in World War One, unveiled what was called ‘a war memorial roll of honour’.

“It was regarded as one of the most beautiful memorial screens in Tasmania,” Professor Petrow said.

“Leading academic, political, military and religious leaders attended the unveiling along with some ex-soldiers and their families. After the unveiling, outside in the courtyard was sounded The Last Post, followed by reveille to end the solemn occasion.

“The Honour Board was beautifully carved from blackwood and contained a left panel with the inscription ‘The Great War 1914-1918’ and a right panel ‘University of Tasmania’.”

The 15 names of those who were killed in action or died as a result of war service were placed in a centre panel with a large, relief carved wreath and the inscription ‘Salute the Sacred Dead, Men Who Went and Return Not’.

The event will be held on Thursday, 8 November, starting with morning tea at 10.30am, the re-unveiling of the honour board at 11am, followed by the lecture. Please email Ceri.Flowers@utas.edu.au or call 03 6226 1874 to RSVP and please indicate if you wish to attend the morning tea and/or if you require parking arrangements for the event.