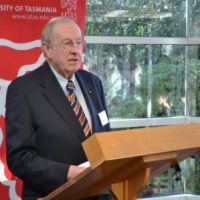 The long-term future of the Tim Hawkins Memorial Scholarship has been secured with the announcement today (Tuesday 9 July 2013) of an $86,000 grant from the State Government.

The Attorney-General, Brian Wightman, himself a proud UTAS alumnus, made the announcement at a function in the University Club organised by the Advancement Office and attended by members of the Hawkins family. The grant has been funded from interest earned by the Solicitors’ Guarantee Fund, which comprises money held in trust for Tasmanian legal firms.

The Deputy Mayor of Clarence City Council, Alderman Jock Campbell, also announced a donation of $10,000 to the fundraising appeal, which has now met its $300,000 target. The UTAS Foundation has given $100,000 to the appeal.

Tim Hawkins, a commerce/law graduate, was killed in the 2002 Bali bombings.

The scholarship is awarded to either a graduate or a current law undergraduate who has studied international law at UTAS. It allows the recipient to take up a six-month research assistant position in the Prosecutor’s Office at the International Criminal Court in The Hague.

Currently scholars receive $13,000 plus a return economy airfare to The Hague.

“This is a most significant announcement indeed,” the chairman of the fundraising committee, Sir Guy Green, said at today’s event. “Up till as recently as three weeks ago we were short of our target but now these donations will ensure that the Tim Hawkins Memorial Scholarship will continue in perpetuity, rather than for just a few more years.

“I don’t think you could find a finer memorial to Tim Hawkins than this scholarship – it’s a continuing, living memorial which will benefit the whole of society.”

Mr Wightman said: “When Sir Guy came to us seeking support it was a very easy decision to make, I must say.”

This year’s recipient, Bridget Dunne, the tenth to date, is currently working in The Hague.