Giving back to State’s young scientists and engineers 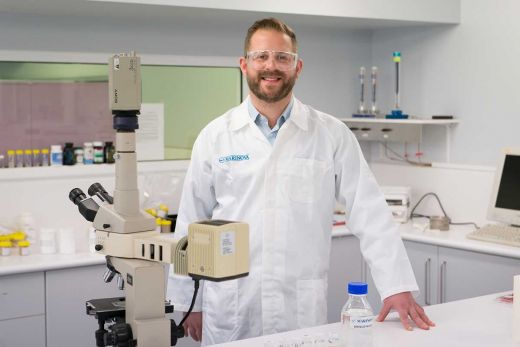 The future of science in Tasmania looks bright, according to University of Tasmania Alumni, Chemist and Science and Engineering Investigation Awards Judge Sam Karpiniec.

With his own successful journey from student to scientist, the Hobart resident combined years of study and hard work to achieve a Bachelor of Science with Honours, and a PhD in Chemistry.

Dr Karpiniec is now giving back to the State's aspiring scientists through his involvement in the annual competition, which challenges students in years 5-12 to explore a ‘hypothesis' of their choice, working in teams or individually.

"I very much hope to keep contributing to this program and encouraging upcoming generations of minds," Dr Karpiniec said.

"There are clearly some very bright students in Tasmania which gives me hope for the future of science."

For months, students conducted experiments in and out of the classroom to test their theories before presenting their findings to judges.

"A pair of students had created a watch that could be worn by aged-care residents, which would help to track their location should something adverse happen," Dr Karpiniec said.

"They'd put a remarkable amount of thought and effort into this and the prototype designs were fantastic. I hope they find great success with this."

Looking back at his own student journey, Dr Karpiniec said he enjoyed the discovery of finding his place in the world of science.

After completing his Bachelor of Science, Dr Karpiniec's honours project was focused on a fundamental area of chemistry.

"This was both fascinating and important (carbon-carbon bond formation via reductive elimination from platinum(IV) centres), but hard to connect to "real-world" applications outside of the lab," he said.

"When the opportunity came up to undertake a PhD project linked to synthetic fuel generation, while still involving lots of fundamental chemistry research, I knew I'd be even more engaged as there was a clear connection to the world outside."

Today Dr Karpiniec is the Senior Chemist at Marinova, which is a Tasmanian biotechnology company with a focus on seaweed-based extracts and their benefits toward human health.

"We do all our extraction and testing on-site, and I'm involved in product development and quality control, amongst other things," he said.

"There was probably never any doubt that I'd do something in the sciences – trying to understand the world in that way has always appealed to me.

"The problem is that I find too many things interesting, so the trick was finding the subject area that was the most engaging. For me, that was chemistry."

Away from the lab, Dr Karpiniec enjoys the outdoors, travelling, hiking, technology and music.