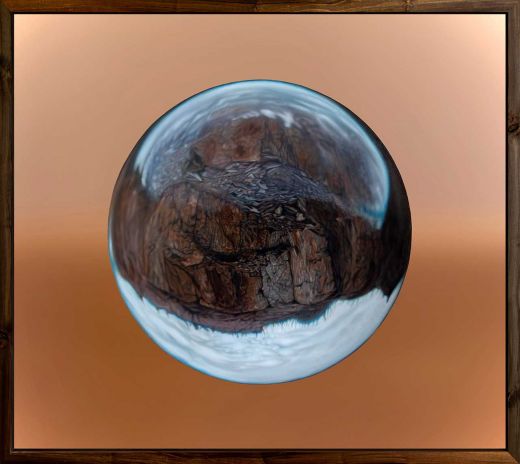 A captivating artwork on copper by University of Tasmania graduate Sebastian Galloway has won Australia’s most prestigious landscape art prize.

Depicting the barren Mars-like landscape of a former mining town on the West Coast of Tasmania, the Tasmanian artist’s work was recognised by the Glover Prize judges for its technical brilliance and subject choice.

Entitled: View Of Mt. Lyell through an Acid Raindrop Oil, the artwork was created using oil paints and copper.

The choice of metal links back to the copper mining that occurred in Queenstown.

In his artists’ statement, Sebastian said although the environment of the town was slowly healing, its Mars-like landscapes were as striking as ever; a persisting testament to more than a century of copper mining.

“As the trees on the hills were felled for building and firewood, acid rain, caused by sulphur dioxide emitted by the copper smelting process, fell to earth and further transformed the landscape,” Sebastian wrote.

“The barren hills of exposed rock remain as stark evidence of an environmental catastrophe, yet they bear a strange and otherworldly beauty and are captivating for many.”

Glover Prize judge Philip Bacon said Sebastian demonstrated he was both an artisan and craftsman.

"From a technical point of view, it's an extraordinary thing," he said.

Sebastian graduated from a Bachelor of Fine Arts in 2014. He is inspired by his love of the natural environment and its inhabitants.

On Instagram, Sebastian said he was overwhelmed by the messages of support and congratulations.

“I feel honoured to have joined the list of Glover Prize Winners.”

This year there were a record-breaking 640 entries from artists from Australia and abroad vying for $50,000 in prize money.

View the finalists here. Or find out more about Sebastian on his website.

This is the second year in a row a University of Tasmania alumnus has won the prestigious prize. Read more about the 2020 winner Robert O’Conner in the Alumni magazine.