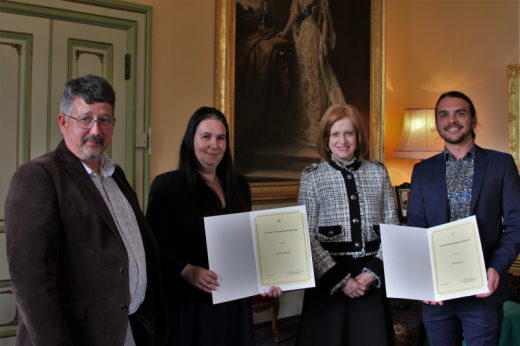 Two Honours students have been awarded Governor’s Environment Scholarships for research that is helping to better understand and manage Tasmania’s unique natural systems.

David Heaton’s Honours project assessed herbivore activity in post-fire environments in Tasmania, while Michael Shelley’s research is evaluating why we should value urban streams and how we can measure their condition.

The scholarships were announced earlier in the year, at the start of the projects, however formal presentations were made at Government House on 25 October.

“I handed in my thesis the morning of the ceremony,” David Heaton said.

“It was good motivation; I got the award for finishing the project rather than for starting it.”

While fire is essential to the ongoing recruitment of many Australian plants and can actually improve and/or maintain biodiversity, problems arise when fire is too intense, or occurs too frequently.

He also concluded that deer and rabbits have preferences for environments and food sources that are likely to become more abundant with climate change, which could create future issues for the survival of native animals, especially wombats.

“We had massive fires in the central highlands of Tasmania in recent years,” David said.

“Two years after those fires, those areas are still burnt to a crisp.

And the effects go below the surface. Intense fires that destroy vegetation can have effects on the stability of wombat burrows.

David’s take-home message is: “We need to do more frequent, low-intensity burning to stop such major fires happening again.”

David benefited from a second scholarship during his studies, the Whitehead Family Trust Scholarship, which provided him with financial support and a base camp in the Central Highlands.

He said the combination of financial support and being able to have a base camp meant that he could spend more time in the field doing his research.

“Jason Whitehead was fantastic. I did quite a bit of fieldwork on his property in the Central Highlands and stayed at his beautiful house. I didn’t want to leave.”

Likewise, Michael Shelley’s Governor’s Environment Scholarship took the pressure off financially to find extra paid work and allowed him to focus on his research.

He is grateful that the scholarship has raised the profile of his research into assessing urban streams around Hobart.

“Urban streams are a great asset and something people need to be made more aware of,” he said.

“We’re very lucky in Hobart that a lot of our streams start in Wellington Park, so part of them are natural streams and we can make comparisons between natural and urban sections.

“It was surprising to learn that many of the urban streams are covered … they’re running under our feet. People would be familiar with the Hobart Rivulet, but there’s also the Sandy Bay Rivulet, the Barossa Rivulet and streams in the northern suburbs.”

Michael is looking at indicators of stream health, such as the diversity of insect larvae, flow, the physical condition of stream banks and beds, vegetation and water quality.

He is using Geographic Information Systems (GIS) to look at the composition of catchments and is investigating the way hard surfaces like concrete produce different stream quality compared with natural vegetated streams, which typically support a higher diversity of aquatic life.

So far, Michael has identified an obvious trend of degradation downstream compared with upstream, with many river organisms absent in more urban environments.

The research will mean that we not only have accurate and up-to-date spatial data along the entire length of each sampled stream, we will also have a tested stream-health assessment method that can be used throughout the State by individual local government areas or other organisations.

Michael emphasised that due to the natural origins of many greater Hobart urban streams, degradation is potentially recoverable, and hopes that the research will help with rehabilitation.

“Growing up in Hobart, you can take our streams for granted – some people even use them as drains – but they provide ecosystem services and have a lot of cultural value as well, so they are important elements in the community,” he said.

Professor Simon Ellingsen, Dean of School, Natural Sciences represented the University on behalf of the Vice-Chancellor and the Provost at the Government House Ceremony.

Presentations were made by Her Excellency, the Honourable Barbara Baker, Governor of Tasmania.

For more on David Heaton’s passion for environmental science and his work as a University of Tasmania Student Ambassador, click here.