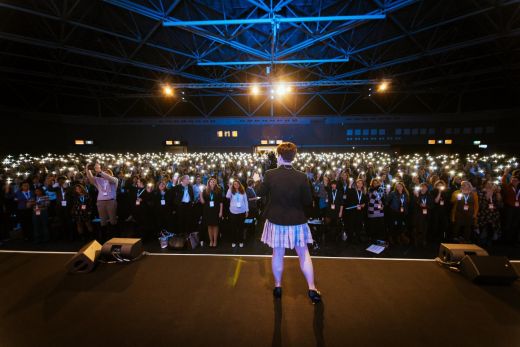 Alumna, Associate Professor Terri Simpkin (BBA HRM, 2003, BCom Hons, 2005, PhD, 2011) is a world authority on the Imposter Phenomenon, which she defines as “the irrational but very real sense of intellectual fraudulence despite high achievement and success”.

She is also the MBA Director at The University of Tasmania and a Churchill Fellow, having held global roles in Higher Education and worked as a consultant in the United Kingdom.

In 2019 she was named by BroadGroup as one of the 50 most influential women in the data economy for her work within the digital infrastructure sector.  In 2020 she was awarded the Brynn Fowler Agent of Change award by Global Women in Telco and Tech for her work advancing inclusion and diversity both in and outside of the workplace.

Impressive, right? Yet, it has taken Terri a long time to believe in her own abilities, which she traces back to a societal narrative about who gets to succeed at what. The Imposter Phenomenon, she says, is a cyclical, socially learned response that can be deeply embedded. Forty years of research have identified an association with depression, maladaptive perfectionism, self-handicapping, externalisation of achievement, fear of failure and, paradoxically, a fear of success. Terri explains that those who perceive a lack of “fit” among their peers are more likely to feel like impostors – and gender, race and class are by no means the only points of “otherness” associated with the Imposter Phenomenon.

In her August 2022 Occasional Address to University of Tasmania graduands, Terri illustrated her personal experience with the phenomenon (often incorrectly called the Imposter Syndrome):

“Picture this. A bright cloudless blue sky capping a perfect late summer afternoon.  I’m sitting in my car overlooking the rugby field at the river end of the UTas Sandy Bay campus.  I’ve driven here on this particular day as it’s a special day. A day I know I will remember for all my days yet to come. It is the day I submit my PhD thesis.

"Now you’d expect this would be a day of jubilation of relief of anticipation of closure.  Instead, I sit in my car wondering how I can avoid the crushing embarrassment that is likely to befall me once this thing was out in the world and judged to be rubbish.  How, I thought, can I conspire to avoid the shame and indignity of having the external examiners question why I was let into the Doctoral programme in the first place. How was I going to repay the Australian Government for the scholarship they’d awarded me when they realise their mistake?  How would I face my family who keenly anticipated the vicarious pride associated with having a ‘doctor’ in the family? Once this thing was released into the world everyone would know that I was a failure.”

Terri went on to say that while she had sat terrified in her car, unable to move, petrified about handing in her thesis, she did manage to submit, and her thesis was very well received by examiners.

Yet she was left wondering what that “hellish long-standing feeling” was about, the belief that “coming from a dirt-poor working-class background in the East End of London to low socioeconomic circumstances in Tasmania, people like me don’t go to university, let alone get into a Doctoral programme”.

After receiving her doctorate, Terri returned to England where she held a global management role at Anglia Ruskin University that saw her work in Vietnam, China, Botswana, Sri Lanka and Trinidad. She worked as an advisor to industry and spoke at events in New York, Frankfurt, New Orleans, Paris and Monaco alongside senior leaders from Amazon, Google and even the British Secret Service.

Still, she felt someone was bound to call her out as a fraud at any minute.

She recalls being invited to a dinner event with a member of the royal family at Buckingham Palace as part of her work with the Baker Dearing Educational Trust. Having worked as a waiter and housekeeper in Hobart, the line “Toto, we’re not in Kansas anymore” came to mind.

Terri’s message to graduands was that aiming for such implausible heights when you come from a very different world is challenging because the social narrative conspires with an internal narrative, and that’s what the impostor phenomenon feeds on.

She describes overt and implicit biases, stereotyping and discrimination, a story perpetuated by master social narratives that invoke invisible but often powerful boundaries on individuals. Boundaries that are, more often than not, utterly false.

Terri challenged those graduating to extend Hannah Gadsby’s message from her graduation address last year to ask themselves not just “Who do you want to be?” but “What is your story?”  Not, she says, the story of your family circumstances, or your work, or your social background or your income or your skin colour, your gender or your sexual preference, but your story.

Terri believes having individuals examine the internal narratives that developed the impostor response in the first place is the best way of eliminating the fuel that drives it. She asks those of us feeling like imposters to question: Are there any personal experiences underlying your belief that you are not worthy of your success, position or recognition? Examples might be parental criticism, sibling rivalry and hurtful past failures – all of which, she says, can be overcome. By revising the stories we tell ourselves, she believes we can free ourselves of the Imposter Phenomenon and achieve the implausible.

Associate Professor Terri Simpkin is the MBA Director at The University of Tasmania and a Churchill Fellow. Her previous roles include Director, MBA Programmes International at the University of Nottingham, Higher Education Principal at CNet Training (UK) and Head of Department, Leadership and Management at Anglia Ruskin University (Cambridge, Chelmsford, London).