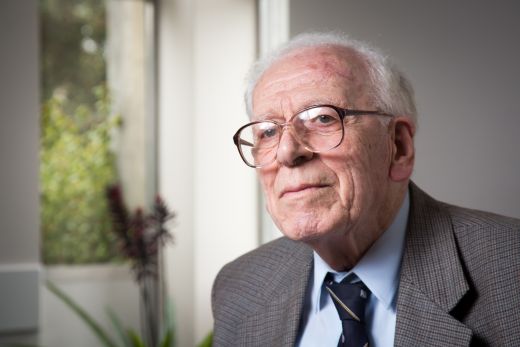 Dr Peter Smith OAM, a long-serving staff member and friend of the University, passed away recently, leaving a remarkable legacy within both the University and Tasmanian community.

Dr Smith will be remembered for his extraordinary contributions and dedication to the University’s discipline of chemistry as a teacher, researcher and administrator. His career in Chemistry included periods as Demonstrator/Senior Demonstrator (1952-1955), Lecturer (1961-1965), Senior Lecturer (1966-1970), and finally Reader (1971-1989). He formally retired in 1989, and is one of only seven academics to have served the school for more than thirty years.

Dr Smith’s support and efforts were also instrumental in the formation of the University’s Central Science Laboratory in 1974, serving for a time as its Acting Director in 1989.

Dr Smith provided guidance and mentorship to generations of Science and Engineering students, both inside and beyond the classroom, becoming affectionately known as the ‘students’ friend’.

“He always endeavoured to foster a close rapport with us, memorising and knowing each student by name. He knew where we came from, about our families and individual journeys, and always had our academic best interests at heart,” said Associate Professor Ashley Townsend, a former pupil of Dr Smith.

“Dr Smith gave so much to us – he fed us tea and biscuits late into the evenings as we studied in the Chemistry Library, he organised many excursions to Tasmanian chemical industries, he helped us find vacation employment, and was always haranguing us to work and study harder.

“He was so generous to us with his time and resources, and he genuinely cared for us and for our wellbeing. That is, I believe, why he was held in such high esteem by so many.”

Dr Smith’s contributions to the University extended beyond the bounds of Chemistry, he actively supported the graduate community and was a major contributor to alumni matters, serving as a Foundation Governor of the University Foundation Board.

For many years Dr Smith had been a loyal supporter of the Tasmanian Cricket Club and took a keen interest in the sporting careers of his students. He donated a perpetual trophy to be awarded to the winner of the TUCC’s third grade batting average. When appeals were made to raise funds to build a pavilion adjacent to the cricket oval, Dr Smith again supported the team.

For thirty years Dr Smith was an official Fellow of Jane Franklin Hall, a residential College of the University of Tasmania, including a period as Chair of the Jane Council.

Dr Smith’s legacy will endure as his namesake scholarships continue to support students undertaking studies in the sciences. Established in 2002, his donations have endowed the Dr Peter Smith Scholarships in Physical Sciences, which assist up to four talented students every year to pursue their passion for science.

In 2005 Dr Smith was awarded a University of Tasmania Distinguished Alumni Award, in 2011 he received an Honorary Degree (DSc) from the University coinciding with 50 years of Chemistry at the Sandy Bay campus, and in 2012 he was awarded a Medal of the Order of Australia (OAM) “for services to science education and philanthropy”.

The University and Foundation, along with countless students, staff and alumni, will continue to remember Dr Smith’s generosity and spirit. He will always remain a valued member of the University of Tasmania family.