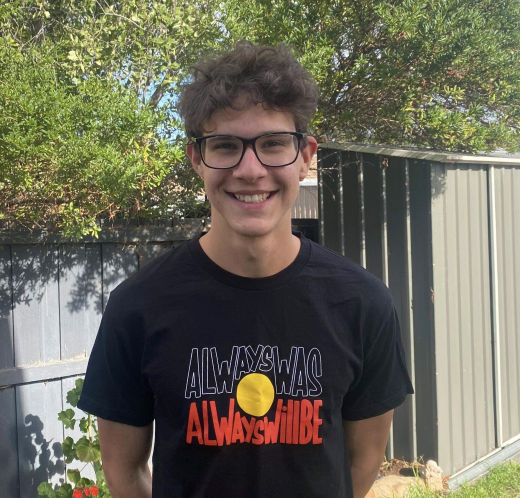 Japan is a long way from Cape Barren Island/truwana, Tasmania, where IT and Business student Tom Dickinson has family connections. But fresh perspectives are what Tom is keen to explore during his Westpac Asian Exchange Scholarship in September.

“I’ve never been overseas before; this is the first opportunity and it’s a big one,” Tom said.

Why Japan? Tom says he “thinks it’s one of the most amazing cultures in the world”.

“Growing up as an Aboriginal man in Tasmania, with family from Cape Barren Island, I have developed an immense respect for culture and tradition,” he said.

“I’m excited to take my studies and passions to Japan because it’s rich with both.”

Tom plans to study at Nagoya University of Foreign Studies to explore his interests in Japanese language, storytelling and history. He is particularly passionate about the power of storytelling to unite people across cultural and language divides.

“I would love to create films/stories/art that is so strong that it brings people together,” he said.

“Everyone can feel emotion, and I want to use that as a medium to connect people.

He says Japanese storytelling is “quite slow, focusing on day-to-day life … there’s attention to the small moments, which they make beautiful, but which would otherwise go unnoticed.

“I think this is something that we should all understand more about, and something we miss in this day and age when things are all happening so quickly.”

Tom is in his fourth year of a combined IT and Business degree with a major in cybersecurity. He is also enrolled in a Diploma of Arts.

While he intends to explore IT in Japan, Tom has bought an old Super 8 camera and plans to make some nostalgic videos. He also has a website and blog, where he will post videos, poems and stories about his four-month stay in Japan.

“I’m really looking forward to the opportunity to live like a local and to be humbled by that experience,” he said.

“I’m hoping to be overwhelmed, really out of my comfort zone, and to learn a lot. It’s scary but you grow in those situations.”

Tom is also a runner and says he is already planning running routes in Japan and checking out parks online.

This year, Westpac Scholars Trust has awarded 71 undergraduate scholarships to passionate students keen to contribute to a thriving tech sector and to Australia’s position in the Asia Pacific. This brings the total number of scholarships awarded in 2022 to 100. Westpac scholarship recipients go on to become part of a growing network known as W100, in reference to the 100 scholarships the Trust awards each year.

Westpac Scholars Trust Acting CEO Amy Lyden says, “Westpac Scholars are next generation leaders united by their generosity of spirit and driven by a desire to shape a better future.

“Whether it is a passion for Asia or technology, our scholarship programs are designed to empower and inspire these young leaders of tomorrow,” she said.

When asked about his biggest achievement to date, Tom says his answer changes every couple of months.

“If you asked me at the start of my academic journey, well it would have been pursuing higher education in something I'm interested in,” he said.

“Right now, it's being a part of the W100 network and having the opportunity to go to Japan! How crazy is that?

“However, I think after this journey is over, I will be able to look back on all my accomplishments and definitively say that my single greatest achievement, and one I'm most proud of, was the first thing on this list: having the initiative to attend University, when no one in my family has aimed to do that before. That's what started this journey and created the domino effect on my life.”