I made it! A lifelong dream achieved against the odds 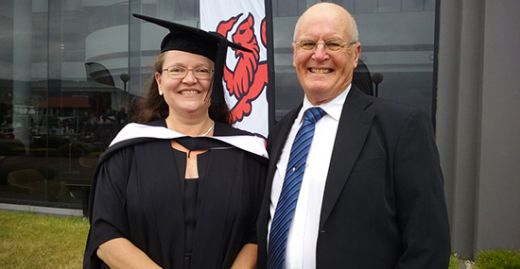 As alumna Charlene Barach walked across the stage at her graduation ceremony in Hobart, she looked up.

Her eyes were wet and her smile wide.

There, against the odds, sitting in the top tier of the Federation Concert Hall was her husband, Rowan. Despite everything, she had made it and so had he.

Fifteen years earlier Charlene had reached the apogee of her sporting life: a 1200km audax event, the Paris-Brest-Paris in France.

It was also where she met her husband-to-be. The pair had only ever conversed online on a cycling forum prior to the event.

“About 1100km into the event, and I’m staggering through a crowded dining hall, dead tired, and someone called out my online name,” Charlene said.

“I thought: what in the world? I turned around and it was Rowan.”

What followed was a long-distance romance spanning three continents, a marriage, worldwide travels and finally, the pair set up a new life in Tasmania together.

“I started working in databases with the Department of Health in Tasmania and that’s when I commenced the Graduate Certificate in Information and Communication Technology with an ultimate goal of reaching my Master’s degree.”

The couple had their life on track and had just begun training to take part in another long-distance cycling event when tragedy struck.

“Rowan was the General Manager of a cherry orchard in Tasmania.

“Before he left that morning, he told me he was checking the nets over the orchard.

“Later that day I received a call from the hospital. They didn’t know what happened. We still don’t. But they found him with a severe brain injury and he was taken to the Royal Hobart Hospital.”

While he was in hospital Charlene continued to pursue her dream of completing a Master’s degree.

She sat by his bedside, reading him the papers she was writing.

And when he returned home after 100 days and she took on the role of carer, she combined caring with working and studying.

“I put on my blinkers and focused on just three things: him, work and University.”

“That was 2018 and online studies weren’t as common as they are now, but I was really lucky because my lecturer allowed me to do some work online, so I could keep going.

“A lot of people asked me why I didn’t drop university. I thought about it for a while, but in a way, it was helping because it gave me something to focus on.

“I could compartmentalise my life when I was in the hospital with him, I was focused on him. And then I came home and because I didn't want to focus on being alone in the house, I focused on the studies.”

Rowan has made a remarkable recovery, but damage to some parts of his brain will have lasting effects on his cognition, movement, short-term memory and energy.

In December when Charlene found out she had graduated with a Master of Information Technology and Systems she was relieved and ecstatic.

“A Masters is something I have always wanted.

“My father got his as a mature-aged student when I was 12 and I thought: I would like to do that too. For years I thought that this is not going to happen, but I finally did it at age 53.”

Her achievement came despite: working full-time, dealing with the horror of her husband’s accident, becoming his carer, giving up her long-distance cycling goal, being cut off from her family in Canada and a global pandemic.