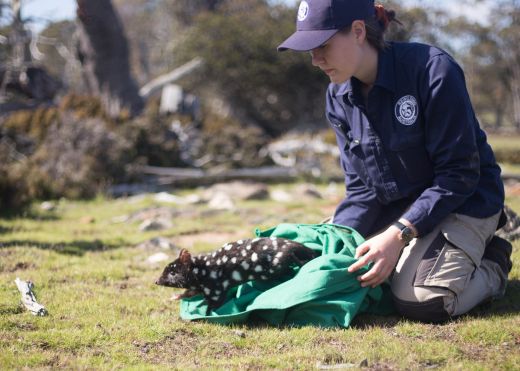 Following their extinction on the Australian mainland, eastern quolls have called Tasmania their only home.

However, the species has recently undergone a rapid decline across the state.

Scientists and conservationists have advocated for urgent intervention for the species, including the establishment of insurance populations on islands across Australia.

A study led by Molly Barlow, then an Honours student from the University of Tasmania’s School of Natural Sciences, used statistical modelling to investigate which islands might be suitable for translocating quolls.

“The paper builds on that idea of island translocations and uses species distribution models to propose islands that may be climatically suitable for the species based on the climate conditions that they are known to currently prefer,” Molly explained.

“We modelled climatically suitable habitat in the past, present and future and identified islands in Victoria and in the Bass Strait that we suggest could be further assessed as potential translocation sites.”

Molly and her co-authors identified several suitable islands for quoll translocation including Snake Island and Sunday Island within the Nooramunga Marine and Coastal Park in Victoria, and the islands that make up the Furneaux Group in the Bass Strait, such as Flinders Island, truwana (Cape Barren Island) and lungtalanana (Clarke Island).

The study highlights how species distribution modelling, a statistical way of identifying suitable areas of habitat for a species, can be used to guide conservation decisions.

“It’s a technique that can be applied to most species and situations and hopefully it will become more commonly used as background research for threatened species,” Molly said.

“More specifically, for eastern quolls, the best outcome would be for this paper to prompt further assessment of the islands we proposed, and ideally to be used as evidence for establishing an insurance population.

“At the very least, I hope this paper will spark discussion on how much eastern quolls need conservation action,” she said.

Molly became interested in animals at an early age and always knew that she wanted to work with native species, which led her to study a Bachelor of Zoology at the University of New England in Armidale.

“During my undergraduate degree, I had one particular lecturer who taught a conservation biology unit. He was so passionate about the plight of Australian mammals and the emerging techniques being used to conserve threatened species,” Molly said.

“His lectures got me interested in threatened species management and conservation biology, and I think in part it was his passion that inspired me to continue in this branch of ecology and led me to move to Tasmania and do an Honours project on eastern quolls at University of Tasmania.”

Molly completed her Honours project in 2019 and has since used her qualifications to secure her involvement in several projects on threatened species.

“In late 2020 I worked with WWF-Australia’s rewilding unit on a collaborative trial release of eastern quolls in the central highlands, led by the Tasmanian Land Conservancy,” Molly said.

“Since the initial release, I have been involved in monitoring the released individuals and investigating the effects of population supplementation on the wild population.”

Following that role, Molly was working at DPIPWE’s Orange-bellied Parrot breeding facility as a contract keeper and has recently moved to NSW to work as an Ecology and Conservation intern with the Australian Wildlife Conservancy.

The research was published in the journal Global Ecology and Conservation.