It’s music to our ears 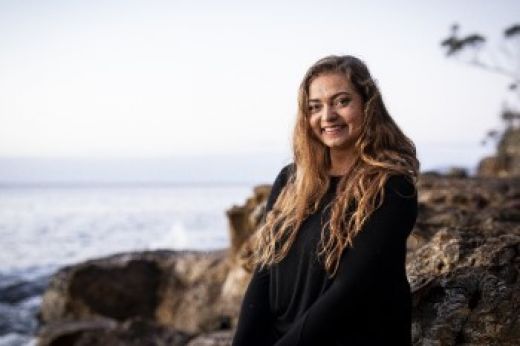 How one generous alumnus created a prize capable of propelling Tasmanian musicians out of the shadows and into the spotlight.

Naarah Barnes was always destined for the stage. She jokes that she was singing and dancing before she was talking. While music and storytelling were almost written into her DNA, a tertiary education wasn’t.

Tasmanian-born Naarah is a member of the Gidja people from the Kimberley and the first person in her family to attend university. She wants others to know that the pathway to success in a highly competitive industry can be challenging.

“It has been a struggle; I haven’t had the direct support of my community or been on my land, which is something that a lot of Aboriginal people need to go through to complete tertiary education.

“But you just have to persevere, even when you are not succeeding; you’ve got to keep going.”

“I’ve also had great support. The head of voice at the Conservatorium of Music, Maria Lurighi just kept telling me that you just have to stick at it and remind yourself of who you are as a musician and an Aboriginal woman and who you want to be.”

In a few weeks’ time, the years of hard work and perseverance will pay off when she graduates from the University of Tasmania with a Bachelor of Music.

Her final year began on a high when she won the coveted OSSA Musical Performance Prize, which has propelled her into the spotlight.

“All of a sudden I am performing all the time and I just haven’t stopped working, it’s fantastic.”

The prize was made possible by a generous anonymous donor, who was a University of Tasmania alumnus. It is awarded to a student to help them pursue excellence in musicianship and performance.

As part of the prize, this month Naarah will embark on a state-wide tour, starring as the lead singer in Isn’t It Peculiar, a collection of songs sourced from female characters in musical theatre. The show taps into Naarah’s love of storytelling, a practice ingrained in her Aboriginal culture.

“Storytelling is such a big part of music for me which is why I really connect with musical theatre,” she said.

“I want to travel around Australia and the world, taking people out of their lives, just for a moment, to connect with the pure joy of music.”

The public is invited to attend the free-of-charge performances in Launceston (21 November), Burnie (22 November), Swansea (23 November) and Hobart (30 November).