Juggling work, study and family to better herself 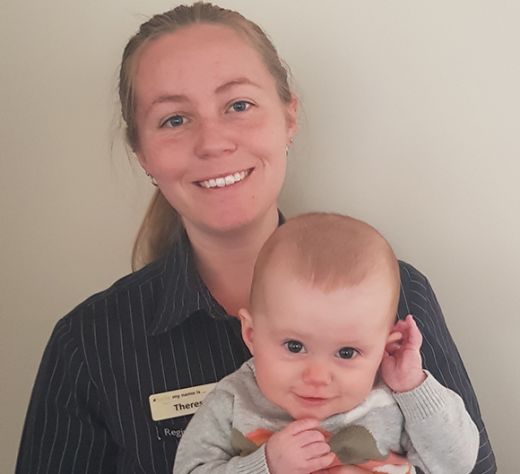 Lifelong learning is a notion that many of us aspire to, but life itself often seems to stand in the way of turning dreams into a reality.

Not so for alumna Theresa Scott (BN 2015). The nurse from the North West of Tasmania was working full-time when she started her postgraduate studies.

When she was finishing them, she was preparing for the birth of her first child. In fact, she found she had passed her diploma the day before her daughter was born.

Following undergraduate study, Theresa secured a 12-month Tasmanian Government graduate position with the then-Department of Health (now Tasmanian Health Service) and worked at the Launceston General Hospital and Beaconsfield District Health Service. In 2016 she was successful in obtaining a permanent position at the Mersey Community Hospital, not far for her home in Latrobe, north-west Tasmania.

“If you want it badly enough, you’ll make it happen,” Theresa said.

“I had two years’ experience under my belt, had consolidated the basics of nursing and knew that this was what I wanted to do for the rest of my life; I felt like I was ready to return to study.

“Education is no weight to carry. We are so lucky to have this opportunity to better ourselves.”

She completed a GradCertN(Specialisation) and the Graduate Diploma of Nursing (Acute Care Nursing).

“The benefit of online is its flexibility. I was able to structure study around my busier or quieter weeks and months, and around shift-work.”

“Also, the opportunity to do summer school allowed me to keep my study flow, but also helped when I needed to drop back, which I did when I was pregnant.”

For now, Theresa has her hands full with little Abigail, but she plans to return to work in January 2021 and complete the remaining two units in her Master of Clinical Nursing.

“I want to be the best role model possible,” she said.

“I hope that she will see that mum can work and study and know that she can as well.”