From specially convened panels to an official reception at Government House, the Law school continues to celebrate the faculty’s 125th anniversary.

It’s been an exciting few weeks of festivities for the Law School as it marks 125 years since establishment with events held in Hobart and Burnie.

Celebrations kicked off on campus at Sandy Bay with an open day and career-focused panels of UTAS law alumni on 14 March. The day began with an all-female political panel:

This was followed by a judicial-related panel: 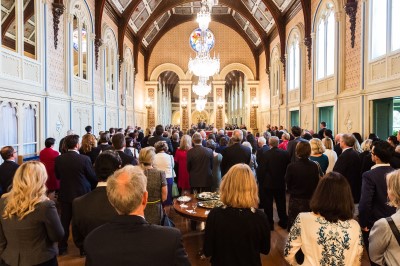 Dean, Professor Tim McCormack (LLB Hons 1982) said it was exceptional to have such a high calibre of successful and respected alumni return to the university to talk to students and the next generation of leaders.

“I didn’t have to twist any arms. It was great to have that level of commitment and support from alumni who all spoke glowingly about the time they had at university and who value their ongoing association with the Law School and with UTAS.”

The celebrations continued into the evening with an official reception for 200 guests at Government House for staff and alumni, hosted by one of the school’s most distinguished graduates, Her Excellency, The Governor Professor Kate Warner AC.

The date was key because on 14 March 1894 the then-Attorney General, Andrew Inglis Clark, James Backhouse Walker, a founding father of the University, and Professor William Jethro Brown, the founding Dean of the Law School, met in the Lord Mayor’s Court Room at Hobart Town Hall to convene the first meeting of the new faculty.

The reception heard from several speakers, including Her Excellency, former Governor of Tasmania, former Chief Justice, and former University Chancellor Sir Guy Green, Premier Will Hodgman and a ‘face of the future’ – 2018 University Medallist Rose Mackie.

“Guests also received a special message from Sir Max Bingham, one of three of our oldest living alumni who graduated in 1950 and was the Tasmanian Rhodes Scholar that same year,” Prof. McCormack said.

“The overarching message that came through was how everyone was grateful for their Law School experience – not just for the academic knowledge gained, but for being encouraged to grow as people and to appreciate the importance of contribution to society.”

Alumni on the North West Coast celebrated at a reception in Burnie on 20 March and Launceston alumni will celebrate the milestone at a function at Inveresk on April 11.

Further events are scheduled for alumni in Melbourne, Sydney and Canberra later this year, and planning is progressing for international alumni in Singapore, Malaysia, U.K. and Fiji.

“Celebrating the milestone is an opportunity to reinforce the links between the faculty and alumni by getting people back together to celebrate all that we treasure about the Law School experience and reminding ourselves about the importance of working for justice in our society.“