Learning to read the rocks 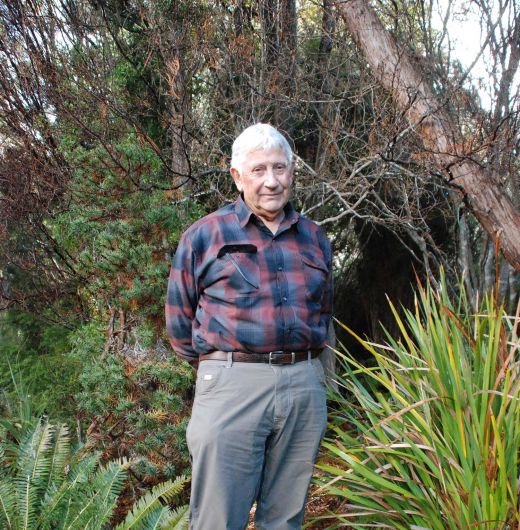 Perseverance and passion formed the bedrock of Dr Keith Corbett’s 60-year career as a field geologist.

It all started on the North-West Coast of Tasmania when a persistent principal paid a visit to the family farm in Riana.

“He said: ‘Keith has got to go to high school’,” he recalls.

That small step taken by a diligent educator would set Dr Corbett on a path towards an incredible career that continues to inspire and interest him even after 60 years.

His parents, Jean and Percy, who had six sons, took the principal’s advice and let their second youngest child make the three hour round trip to attend high school in Ulverstone.

He continued his educational journey, receiving a scholarship to study a Bachelor of Science (Geology) at the University of Tasmania in Hobart.

In his book, Child of Gondwana: The Geological Making of Tasmania, Dr Corbett said he was “enthralled, excited and somewhat overwhelmed” by the prospect of moving to the city in the south.

“Going to university in Hobart from rural North-West Tasmania in 1958 was like going to another planet for this simple country boy,” he said.

“There was a great deal of intellectual stimulation, and interesting social life, and I did some rapid ‘growing up’.”

Prior to his tertiary studies, Dr Corbett hadn’t considered studying geology, but there was an instant attraction to a subject that let him explore the bush, and explore it he did.

His passion for geology also led him to the love of his life, Sib (Elizabeth), who was a fellow geology student at the University.

One of the most profound impacts on his studies was his lecturers, who “helped him to read the rocks.”

The first was inspirational researcher and teacher the late Professor Sam Carey, who was the University’s first Professor of Geology when the Department of Geology was established in the 1940s. He was an early proponent of continental drift.

He is also indebted to the late Dr Maxwell R Banks AM, an esteemed faculty member at the University’s Department of Geology, who taught subjects, which helped students determine the order rocks were formed in. Indeed, students are still benefiting from his commitment to geology, thanks to the generosity of his family, who established the Max Banks Research Scholarship in Earth Sciences.

Dr Corbett completed his Honours year by exploring more than 200 square kilometres of the Florentine Valley, where he learnt to be self-reliant in the bush.

His first job as a geologist was with the Hydro-Electric Commission mapping dam sites in South-West Tasmania. Then he was offered a PhD scholarship with BHP to map their mineral exploration licence in the same area.

A short stint in Western Australia was followed by a long period mainly exploring the Mount Read Volcanics on the West Coast of Tasmania for the State Government.

At age 55, Dr Corbett became a consultant and spent a number of years studying Mt Lyell on the West Coast.

He climbed Federation Peak at age 60, and still enjoys bushwalking. The now 80-year-old continues to work as a consultant geologist and his expertise is highly sought after.

All these years later, he still reflects on the forces that drove him to study a degree that would later define the best part of his life for six decades.

It’s fitting that he dedicates his book to his parents, who he said “loved him and got him to University”, his mentors at university, and his wife, who he said “came with me to the mountains.”

He hopes that the book, which is designed to be read by lay people, will enhance Tasmanian’s sense of place by improving their understanding of the island’s unique geological history.