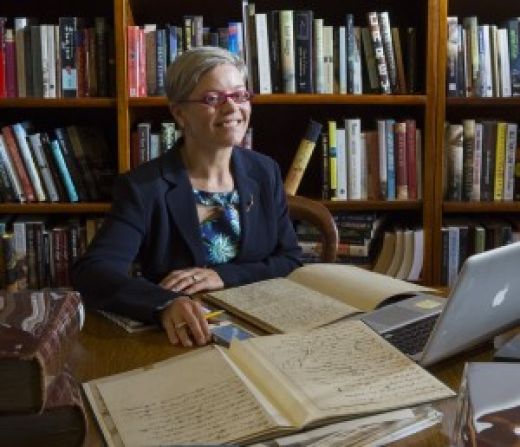 WHEN does a culture truly die? And who decides ‘if’ and ‘when’ it is alive, dead or revived?

A celebrated Tasmanian historian and author aims to explore our understanding of cultural extinction by researching an international history of survival and revival.

“Extinction is not a consequence of imperialism, it is an imperial imposition,” A/Prof Taylor said.

Taylor gave a public lecture in Hobart last week after winning the 2018 Dick and Joan Green Family Award for Tasmanian History for her book: Into the Heart of Tasmania: A Search for Human Antiquity.

Taylor was the first winner of the biennial award, which recognises an author of high-quality published work that significantly contributes to the knowledge and understanding of Tasmania’s history and cultural heritage.

The Green Family bestowed the $25,000 biennial award, which is managed by the University of Tasmania.

It is offered in honour of Joan Green and her late husband, Dick, who were key drivers in the establishment of the National Trust in Tasmania and strong supporters of the arts and many community organisations.

Incoming award chair, Professor Kate Darian-Smith, the Executive Dean of the College of Arts, Law and Education thanked the Green family for their profound support of Tasmanian authors and historians.

“Thanks to the generosity of one family and the support of the University, Tasmanians were given a unique opportunity to hear a fascinating synopsis of our shared and rich historical legacy in the first public lecture by an award recipient, followed by a highly-engaging Q & A session.”

In her lecture, Taylor told the story of how she researched the papers of English collector, Ernest Westlake who travelled to Tasmania in 1908.

His notebooks provide an unparalleled snapshot of community knowledge and feeling about Aboriginal past and culture in 20th century Tasmania.

Although it was not apparent to him at the time, they also reveal an insight into how that culture was retained and practiced.

Taylor’s latest research into cultural extinction and survival was particularly pertinent, she said, given the threat of a global sixth extinction.

Previously, she said: “only ‘primitive’ peoples, it was presumed, could actually ‘die out’.”

“The phenomenon of the “doomed race” was both a colonial consequence and convenience,” Taylor said.

“Now humanity’s looming end is a rallying point for climate action and for a new allegiance to Earth before country.

“How can the West lead these calls without acknowledging that extinction has long been imposed upon Indigenous peoples, denying them rights to their countries and their identities?”

As part of her project, Taylor will tell the stories of five Indigenous communities, who despite being declared totally, or nearly ‘extinct’ by imperial Europeans, maintain that they have survived.

Nominations for the 2020 award recently closed and the shortlist will be announced mid next year.

Speaking on behalf of Joan and the family, Caroline Johnston, one of Dick and Joan’s daughters, said Professor Taylor embodied their idea of scholarship, research and writing that the family had in mind when setting up the award in 2016.

“Her book that won the inaugural award was extremely interesting and thought provoking,” she said.

“She is an inspiration to our family and we are delighted to be able to recognise her work and provide some support for her future research and writing.

“The family is committed to continuing this biennial award and it is exciting to see the first award complete and nominations for the second award are in.”