Performance, partnership and giving at the heart of Hedberg 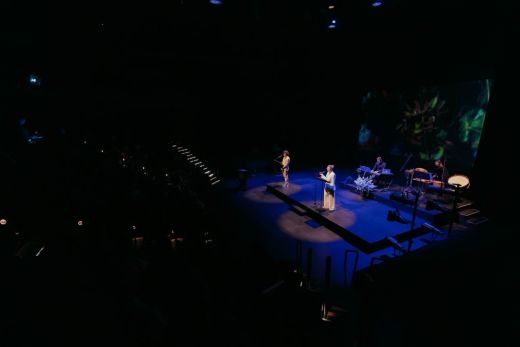 A showcase of music and theatre accompanied the opening of the Hedberg, an ambitious University of Tasmania performance and teaching facility situated alongside Hobart’s Theatre Royal.

Described by Vice-Chancellor Professor Rufus Black as an "extraordinary place", The Hedberg was made possible thanks to partnerships between the Tasmanian and Australian governments, the University, the Theatre Royal and donors.

Several named spaces within the Hedberg acknowledge the generosity of philanthropic partners who are setting the stage for the University’s creative future. They include the Ian Potter Recital Hall, The Claudio Alcorso Foyer and the Vanessa Goodwin City Room and Roof Garden.

The official opening on August 9 was the culmination of more than a decade of planning and construction. More than 45 students from the Music program in the School of Creative Arts and Media performed as part of the celebration, which included a performance by Archipelago Productions of Shakespeare's Venus and Adonis, featuring Ben Winspear and Marta Dusseldorp.

The Hedberg was officially opened by the Minister for the Arts, the Hon Elise Archer MP, who said she looked forward to seeing "the Hedberg play a pivotal role in fostering Tasmanian talent, creativity and artistic endeavour for many years to come".

The evening’s celebration included a diverse representation from the Music program, including students from classical, jazz, modern/contemporary, acoustic, electronic dance music and experimental sound, as well as performances from the winner and finalists from the recent Ossa Music Prize.

​​​​​​​The Hedberg architecture, by Tasmanian firm Liminal – Founding Directors, Elvio Brianese (BAEnvDes 1990, BArch Hons 1992 and Peta Heffernan BEnvDes 1996) – reflects its location on the lands of the muwinina people, bridging us "from deep time to future time," in the words of Professor Rufus Black.

Professor Black said the Hedberg was for people throughout Tasmania who are passionate about the creative arts. "The Hedberg will be a home for creative expression for and from our island in ways never seen before," he said.

"Success in music and other creative arts requires extraordinary focus and dedication. This is a moment to celebrate the excellence of the staff and students, both classical and contemporary, in our Music program."

Professor Black said music, in its many forms, played an ever-expanding role in our lives, whether that be streaming through mobile devices or as integral parts of the gaming, video and multi-media we consume.

"But even in the digital world that very human experience of live performance is irreplaceable. In the post-COVID era in this beautiful building we will be able to enjoy that uplifting and unifying community experience of hearing great music together."

The University's Theatre program, expanded from its Launceston base, will be taught in Hobart for the first time in the Hedberg. The building's technical and performance capability also enables the convergence of art, science and technology. It invites questions such as how can we improve the lives of dementia patients with music, or make the big data of the oceans accessible through image and sound. Staff and students can explore sonic frontiers and unleash the potential of digital interconnectivity, streaming, broadcasting, mixed media production, theatrical and visual expression, video and gaming.

For more on The Hedberg, see here.