Picture This: showcasing incredible images from our alumni community 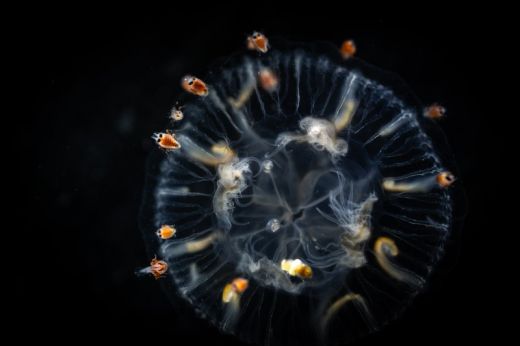 Deep beneath the Antarctic sea ice is a mysterious world teeming with mesmerising life forms.

In this incredible photograph, Institute of Marine and Antarctic Studies (IMAS) researcher Dr Emiliano Cimoli (PhD 2020) captures what he wonderfully describes as a “jellyfish bus”.

The large colourless umbrella of the Diplulmaris antarctica is the perfect place for tiny crustaceans to hitch a ride in the remote sea ice.

“While little is known of these specimens' symbiotic interactions, it is believed that these passengers utilise the medusa top as a mating platform (where females await more mobile males) and as safe harbour between feeding sessions.”

Its purpose was to look at plant-like microorganisms living attached to the ice that sustains the entire polar marine food web and are known as sea-ice algae.

“These algal organisms attach to the bottom of thick (1.8 meters) sea ice in a mesmerising upside-down landscape,” Dr Cimoli said.

“To deploy scientific instruments beneath the ice we make large holes in the ice which are pretty much like windows into this under-ice world.”

It was during this process that jellyfish began approaching the window to display their tricks and curious phenomena of different biological or physical nature.

“During my first expedition, I fell in love with the variety of weird creatures that pop up from these under-ice windows. I grew extremely curious about them and I spent all my free time looking at them.

“At the time, I did not have the means to capture them in adequate quality in such a challenging environment.

“During the second opportunity I had to travel down south, I brought a comprehensive set of illumination and camera gear which allowed to do the job.”

Dr Cimoli said while photography was a hobby, it was linked to his academic career where he develops and applies optical methods to study physical and biological interactions in terrestrial and marine environments.

“Contrary to our eyes, optical sensors give us less biased and more complete information about the feature they are observing.“ Therefore, we can infer a lot more about biological systems without even touching them!

Read more about the incredible research and watch video footage of light and life beneath the Antarctic sea ice.

Thank you to everyone who has submitted a photograph to Picture This, a section that seeks to celebrate our global alumni community by showcasing all the amazing places we live and the interesting aspects of our diverse lives and careers.

To submit a photograph, or to find out more, please email us or message us on Facebook.