Promising law scholars continue the legacy of a leading alumna 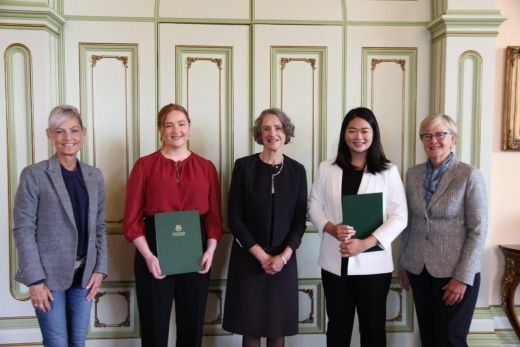 Two promising University of Tasmania law scholars striving to improve equity in the justice system, and society, have been given the opportunity of a lifetime to pursue their passions.

Gina Goh, who is in her final year of a Bachelor of Laws, is the 2021 recipient of a scholarship named in honour of the late Attorney-General, lawyer, criminologist and alumna Dr Vanessa Goodwin.

The Dr Vanessa Goodwin Law Reform Scholarship is generously funded from Dr Goodwin’s estate and contributions from the Tasmania Law Reform Institute, the Tasmanian Government, the Department of Justice and the University of Tasmania.

“This scholarship has been an incredible opportunity for me because I get to work with like-minded people who are very passionate about law reform issues and in ensuring that the law remains relevant to the needs and values of today's society,” Gina said.

“I would like to extend my sincerest gratitude to Dr Goodwin's family for providing me with this invaluable opportunity to pursue my passion in law reform and social justice while also celebrating Dr Goodwin's amazing legacy in legislative reform.”

The students recently attended an award ceremony at Government House in Hobart.

Megwyn Mosenthal is in her fourth year of an Arts/Law degree.

Her Preventing Elder Abuse Tasmania (PEAT) Scholarship will allow her to work with a range of experts on elder abuse reform through an internship at the Tasmania Law Reform Institute (TLRI).

Megwyn was inspired to act in this area after reading about human rights breaches in aged care homes during the coronavirus lockdowns, becoming aware of the integral role of law reform as societal values evolve.

“Within my role as an intern at the TLRI under PEAT, I am very grateful for the opportunity to immerse myself in the fine balance between respecting the rights of aged care residents and protecting their wellbeing during a state of emergency such as the pandemic.

“I have realised the integral role of law reform in updating the law as the values of society evolve.

Image: Megwyn, second from left, and Gina, second from right, are pictured with the Attorney General, Elise Archer, the Governor of Tasmania, Her Excellency Professor the Honourable Kate Warner AC, and the PEAT Lead Researcher, Dr Suanne Lawrence (PhD 2013).