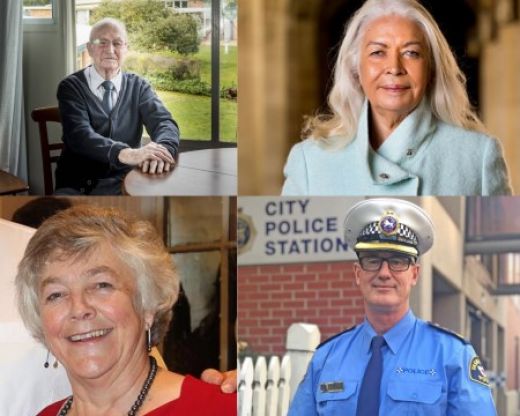 They live a life of service, whether it is keeping us safe, entertained or educated.

And now the efforts of these unsung Australians have been singled out for recognition in the Queen’s Birthday 2020 Honours List.

University of Tasmania alumni, staff (present and former) and friends were among 933 outstanding Australians honoured for their contributions to their community and beyond.

Governor-General David Hurley said the recipients highlighted the positives in our community.

“We see the great ideas, we see the hard-work, we see the love and compassion for fellow human beings – it’s a microcosm of Australia,” he said.

“This list recognises a group of outstanding Australians who have made a contribution to their community, to Australia globally or domestically. Their efforts have been noted by their peers, they’ve been nominated and assessed independently as worthy of recognition.”

We offer a warm congratulations to the alumni, staff and friends of the University of Tasmania recognised for their service.

Here is a full list of recipients with connections to the University of Tasmania.

Tasmania Police Inspector Glen Ball was recognised for 40 years of dedicated service to the Tasmanian community.

He performed a tactical role as part of the Special Operations Group in the inner-cordon at the Port Arthur incident and was part of the team who made the arrest. He has also been heavily involved in many complex investigations including cold case murders, major fraud investigations, and legislative reforms and operational responses targeting outlaw motorcycle gangs.

For distinguished service to the performing arts as an acclaimed actor and artistic director, and as a mentor and role model.

The former head of the Sydney Theatre Company has worked in the performing arts industry for more than 60 years.

The Australian actress is considered one of Australia’s greatest living stage actresses, known for her performances in Macbeth, King Lear and My Fair Lady. She is also known for her roles in films The Castle, Careful, He Might Hear You and, television series Upper Middle Bogan.

For service to education, and to the community of Tasmania.

Mr Wilson has been honoured for his leadership in education and passionate pursuit of mathematics.

In Tasmania, he worked as the Department of Education’s Superintendent of High Schools and Director of Secondary Education from 1973-1984.

For significant service to industry and manufacturing, to skills training, and to multicultural youth.

For significant service to mathematics education, to teacher development, and to the community.

Associate Professor Callingham has an extensive background in mathematics education and research in Australia and internationally. Her international experience includes working in Hong Kong and North Korea.

For service to local government, and to the community of Albury.

Mr Thurley is a councillor and former deputy major of Albury City Council. In addition to his role with the council, he is the national president of the Murray Darling Association, advocating on behalf of communities who depend on the water resource.

He is also the president of the Astronomical Society of Albury Wodonga and has volunteered to teach science in schools.

For service to seafarers through charitable initiatives, and to the community

Recognised for his work with Mission for Seafarers Brisbane, Capt. David Ellis was the past present of the organisation which provides welfare, pastoral and spiritual support to more than 10,000 seafarers each year.

For service to the community.

Ms Luckin was recognised for her extensive work in the community in a diverse range of areas from vocal ensembles to volunteer nursing. She has played a lead role in Meals on Wheels, as a driver, volunteer and branch president. In addition, Ms Luckin is a costume maker and manager with Brisbane Junior Theatre. She also mentors with the Kids Hope Programme, which assists children with social and educational challenges.

The following people have also had connections with the University:

For service to medicine in the Australian Capital Territory

Dr Abhayaratna is a skilled senior consultant and cardiologist, and researcher at Canberra Hospital and Australian National University Medical school who is investigating cardiovascular disease prevention.

For distinguished service to tertiary education, and as an advocate for Aboriginal and Torres Strait Islander people.

The University of Melbourne academic has an impressive track record in advancing education for indigenous Australians. Professor Langton is also an anthropologist, geographer and author. She also co-chairs the commonwealth government’s senior advisory group on options for an indigenous voice.

For significant service to tertiary education, to cancer and palliative care nursing, and to medical research.

Professor Yates is a registered nurse with extensive experience as a leader in education and research in the health sector. She is currently the Executive Dean of Health at the Queensland University of Technology (QUT). Her research program focuses on cancer, palliative and aged care and managing cancer related symptoms and side effects.

For significant service to tertiary education, to anatomy and neurobiology, and as a mentor.

Dr Dziegielewska is an Honorary Associate Professor, Department of Pharmacology and Therapeutics, at the University of Melbourne where she has held numerous academic positions.

She also spent a considerable portion of her career at the University of Tasmania, including in the Department of Pathology and Department of Anatomy and Physiology.