Scholarship provides opportunity of a lifetime for two graduates 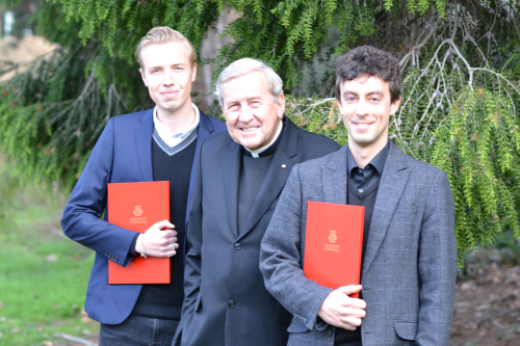 Studying at one of the most prestigious universities in the world was made possible for two University of Tasmania alumni thanks to the Michael Tate Oxford Scholarship.

Named after the University of Tasmania and University of Oxford alumnus Reverend Professor Michael Tate AO, the scholarship enabled graduates Harrison Virs and Adrian Staples to study the nine-month Postgraduate Diploma in Theology and Religion offered through Oxford’s Blackfriars Hall.

Father Tate said the scholarship gave Tasmanian graduates the chance to experience a totally different environment in the United Kingdom, with centuries of academic traditions.

“The experience expands the mind and challenges a person who’s quite successful in their own field of study,” Father Tate said.

“They’re stretched beyond their current imagination to take upon a completely different discipline and do it well.”

For 25-year-old Harrison Virs, of Hobart, studying at Oxford was a transformative experience.

“The opportunity was invaluable to me in that I was challenged by concepts I had never before engaged with, and the course encouraged me to consider ways of approaching historical material that I had never considered before,” Harrison said.

“It was inspiring to meet people from different backgrounds and areas of study, and I feel as though I learned a tremendous amount from such different viewpoints.

“Having the opportunity to study in the facilities affiliated with Oxford University really opened my eyes to different ways of conducting research.”

Adrian Staples said that the opportunity study at Oxford was intellectually and social enriching, and one for which he will always be grateful.

“The scholarship gave me the opportunity devotedly to investigate significant philosophical, scientific, historical, and theological material with leading experts in theology and in other fields, and every week to refine and to defend my own thoughts with increasing rigour and confidence,” he said.

“The remarkable thing about Oxford, and Blackfriars Hall in particular, is the confluence of its people and their ideas. The community of Blackfriars, which consists of lay people and Dominican friars, contains a wealth of fine people, amongst whom I did not want for anything.

“I consider myself very fortunate to have been able to immerse myself in that environment."

Launched last year, the scholarships are valued at up to $65,000 each, and cover fees and associated expenses, travel costs and living allowances for at least one year.

It is available to any University of Tasmania graduate, or current honours or postgraduate student, wishing to undertake the Postgraduate Diploma in Theology and Religion at Oxford.

The diploma offers an intensive period of study in Christian theology, with the option to explore other world religions.

The scholarship launch last year follows Father Tate’s distinguished career as a politician, priest, diplomat and academic, having received two honorary doctorates, and an appointment as Officer of the Order of Australia (AO) to honour the role he played a Federal Minister for Justice.

For more information on the Michael Tate Oxford Scholarship please go to: https://info.scholarships.utas.edu.au/AwardDetails.aspx?AwardId=2609

To find out more about scholarship recipient Harrison Virs, he is this month’s alumni profile.