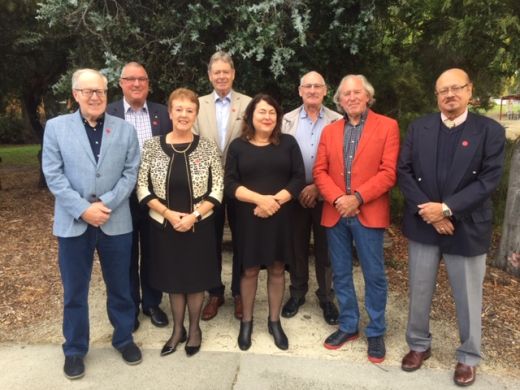 Law alumni from the Class of ’71 celebrated the 50th anniversary of their graduation by returning to their old stomping ground in Sandy Bay.

The reunion, organised in partnership with the Alumni Relations office and three enthusiastic volunteers, was a special time for a small group of graduates to reminisce about their formative years at the University of Tasmania and stay connected to their alma mater.

The organisers included: former Chief Magistrate Adjunct Professor Michael Hill, Jan Martin (nee Janine Donald), who was the former Executive Director of the South Australian Law Society and former CEO of both the Law Society of Tasmania and Law Society of South Australia, and Simon Gaunt, the former Special Counsel for the Commonwealth Bank and now a successful artist and sculptor in Sydney.

The Class of ’71 had the largest group of female law graduates in one year at the University, a milestone that was marked by a photograph in the newspaper.

Professor Hill said he had a sense of pride in being a member of the Class of ’71 and that he always admired the intellectual capacity of his female classmates.

“They were so clever and appeared to be switched on across the many subjects we were taught,” Professor Hill said.

“I must say I am very proud to be associated with of all of them, particularly after I heard some of the issues they had to deal with in their professional careers (issues I had never contemplated at that time of my life).

“Each of them has achieved significant success in the directions they took after university.”

In an intimate gathering, 10 alumni attended a weekend of events to celebrate the milestone, including: a tour of the Law School, the opportunity to meet the new Dean and Head of the Law School Professor Michael Stuckey, as well as the chance to catch up with their fellow alumni.

They visited the Moot Court, where students take part in a simulated court or arbitration proceedings, a facility not available in 1971.

The graduates were also shown the damage to the Law Library from floods in 2018, resulting in the loss of thousands of books.

In addition, the group visited the Tasmanian Law Reform Institute where they were able to hear about the current projects underway, including preventing elder abuse and neglect.

Professor Hill said during their time at the University, significant world events were occurring, including the moon landing and the Vietnam War.

“I remember we were a pretty happy group, many of us socialised out of uni and have remained friends over the years,” he said.

“I feel a particularly special bond with my fellow students as we reminisced about some of the eccentric lecturers we had! We did share some wonderful (and not so wonderful) experiences I must say.

“I had rather a sense of pride in being a member of the class of ’71, and hearing each of my friends tell what they had done over the past 50 years only enhanced that pride.”

“In their own way they have each made significant contributions to their communities.”