Serious side to scientist’s social media 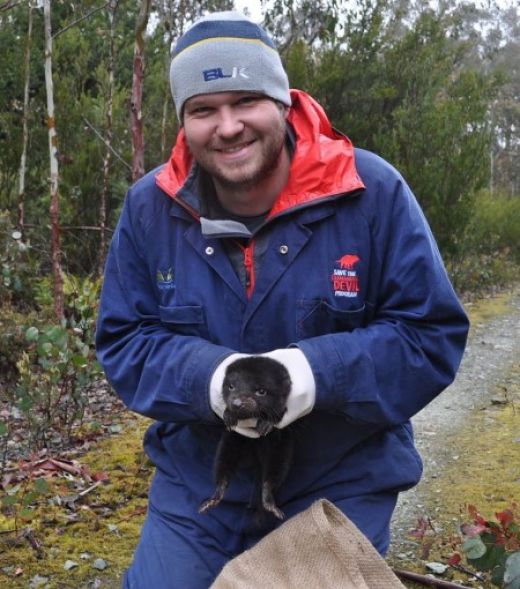 It all kicked off with a tweet of a photograph of some feet. They were hairy with only four digits. A stampede of Twitter fans soon followed.

This was the moment that University of Tasmania PhD candidate David Hamilton’s social media stardom was cemented.

He had posted a photograph on his Twitter account of a hobbit-like foot belonging to a Tasmanian devil.

The researcher has more than 6,500 people following him on Twitter; his most captivating posts reach hundreds of thousands of people.

David signed up to the social media platform years earlier, as a way of communicating with other scientists and staying up-to-date on global research.

Every three months the behavioural ecologist ventures into pristine Tasmanian wilderness - from the Arthur River in the west to Freycinet in the east - to monitor the devils.

He has a knack for producing compelling photographs of the amazing animals he encounters and can communicate complex information in 280 characters or less.

“I started posting some photographs and videos of my field work, predominately Tasmanian devils and people seemed to be quite interested,” David said.

“Devils are a very charismatic species and people don’t know much about them.

“Being able to communicate some basic information about the marsupial on social media seems to have really engaged people across the globe.”

His Twitter page has a wealth of information about devils. It tells you that they only have four digits on their rear feet, become independent from their mother at around 10 months of age and their front legs are a bit longer than their rear legs, giving them a distinctive gait.

But it was his photograph of the underside of devil feet that was picked up by media outlets around the world. It also inspired the University’s Save the Tasmanian Devil Appeal to embark on its first Giving Tuesday Appeal.

Donors who gave $25 or more to the Appeal were made ‘devil sole mates’ and given a sticker inspired by David’s foot photograph.

The world’s largest surviving carnivorous marsupial is under threat from the Devil Facial Tumour Disease (DFTD) and the University carries out vital monitoring and research to help ensure there is a healthy and enduring population of devils in the wild.

More than 250 stickers were sent to devil ‘sole mates’ from around the globe, from Germany and Poland to Japan and the United States.

As well as raising money for the vital research, David’s engagement on social media has also led to cross-discipline collaboration and people keen to volunteer with the team.

“It’s a brilliant bridge between researchers from different fields, even for those from within the same university who don’t interact on a regular basis,” David said.

“I’ve had collaborations on social media, for instance, where researchers working on a totally different aspect of something, such as movement ecology, saw one of my posts and noticed that devils had an interesting gait.”

David’s research focuses on social interactions between devils in the wild.

“We don’t know a lot about their behaviour, but we know the cancers are spread by bites, so their social networks have a massive bearing on the transmission of their facial cancers,” David said.

The team uses proximity monitors, which involves putting collars on the devils and recording when two animals have been in a certain distance of each other.

“It gives us a cool insight into the social interactions of the devils in the wild and will help us figure out how that directly or indirectly relates to the transmission of the disease.

“It might enable us to pinpoint animals in the population that are important to the disease spread.

“If we were looking at monitoring in the future, perhaps we would vaccinate or isolate these devils, to prevent the spread of the disease.”

In 2019, David published research showing that male devils were a key source of bite wounds during the mating season, helping to spread the deadly facial tumour diseases.

You can support David’s work and other devil researchers at the University of Tasmania by donating to the Save the Tasmanian Devil Appeal here. You can also follow the Appeal on Facebook, or David on Twitter.