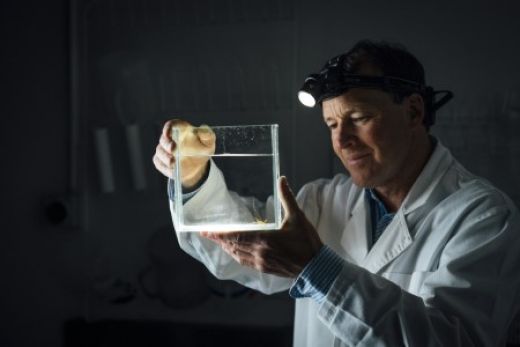 Tropical rock lobsters are prized on plates across the world.

It’s this insatiable appetite for the seafood delicacy that’s driving a bid to build a world-first onshore rock lobster hatchery in Tasmania.

The proposal was made possible thanks to ground-breaking University of Tasmania research that uncovered the secret to successfully breeding tropical rock lobsters.

Now, a company led by an aquaculture alumnus, has partnered with the University in a move that could revolutionise the industry.

Scott Parkinson (DipAppScAq 1991) always loved science and the sea, so studying aquaculture was a natural progression.

“During my studies with the University of Tasmania in the late 1980’s, the Launceston Aquaculture campus expanded from only a few lectures, to the key Centre for Aquaculture under the direction of Professor Nigel Forteath,” Mr Parkinson said.

“This was one of the first institutes to focus on aquaculture in Australia to meet the growing demand of the expanding salmon industry.”

Last month it lodged a development application to construct a new rock lobster hatchery at the Institute for Marine and Antarctic Studies (IMAS) research laboratory site in Hobart.

The lobster hatchlings will be born in a tank in Taroona before being sent to an Ornatas site in Queensland so they can be grown to a marketable size.

“This is world leading technology and it is up to the hard-working Ornatas team to turn the University of Tasmania research outcomes into commercial reality – no small task,” Mr Parkinson said.

“Fast forward 10 years and we aim to have 1100 tonnes of tropical lobsters being distributed annually throughout the world.”

“Building the world’s first tropical rock lobster hatchery will raise new research questions for our scientists, as lobsters have a complex life cycle and have never been reared on this scale before,” Mr Bailey said.

There are three main stages of rock lobster development, Mr Parkinson explains, but the most unique is when it metamorphoses into a lobster.

“The Phyllosoma (larval stage of a lobster), which is a two-dimensional spider-like creature, transforms into a three-dimensional Puerulus (baby lobster) in 15 minutes.”

The image below illustrates the stunning transformation.