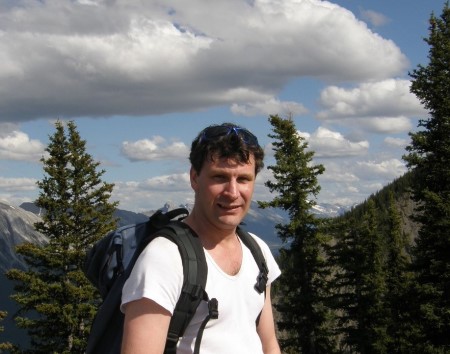 The Senior Business Development Advisor for Asia Pacific at Esso Australia (an affiliate of ExxonMobil Corporation) in Melbourne. I advise on investment opportunities for their upstream oil and gas portfolio in a region that spans from India to New Zealand, and Mongolia to Tasmania.

You have travelled around the world, supporting energy exploration projects in Argentina, Kurdistan (Iraq), Papua New Guinea, Croatia, Greece, Cyprus, Libya, Madagascar, and Portugal. With this national and global perspective, what do you think makes Tasmania such a unique place to live and study?

Geologically at least, Tasmania is unique – it’s a small piece of Antarctica left behind after the big tectonic events around 90 million years ago – and now we can see it, not covered by ice, thanks to ending up in the temperate zone.

For a geologist, this makes Tasmania a very special place to look at the rocks, in order to better understand the great frozen continent to our south.

Being a small island also contributes greatly to our character here: we are more self-reliant, more resilient and resourceful.

We must be prepared to journey to the rest of the world to bring ideas back and see what works here in our place.

And we have to welcome the curious, who come to see this place that was once, almost literally, the ‘end of the world’ to Europeans.

How do you tell people at a dinner party about what you do for a living?

I help source the lower CO2 intensity energy that keeps the lights on when the sun isn’t shining and the wind doesn’t blow. Energy that keeps aeroplanes flying worldwide every day to connect the planet. The energy that keeps bulk road transport and agriculture operating economically, so that food is cheap and readily available everywhere it is needed.

None of these things are possible with renewable energy sources and battery storage solutions we have available now.

I’m also on the board of the UTAS USA Foundation, which supports the mission of UTAS in the USA, via our alumni network and Stateside friends of the University.

One of the things that motivates you is mentoring the next generation of explorers. What makes a good explorer?

A successful explorer needs to be curious, technically competent (including: knowing what it is they don’t know, or don’t know well enough), open to new ideas and experiences, and entrepreneurial in converting ideas into commercial business opportunities.

You also must be comfortable with the notion many ideas don’t work, and that its okay to drop an idea and turn to the next one.

A portfolio of opportunities is therefore better than a single shot (and it also gives you more places to explore and apply your knowledge).

I chose to study at the University of Tasmania because…

I won a University Exhibition in the Tasmanian HSC exams, and a scholarship to study Geology at CODES – which is one of the top geoscience schools in the world… so there was no need to go anywhere else.

What inspired you to go into geology – was it always your desired career path? As a teenager where did you think you would end up working?

I was inspired to consider geology as a choice of career because I was a very keen bushwalker and rock climber in my teens – and I wanted a career that would get me out of the office and into the outdoors. Geology is a natural choice for this – although as time goes on, I spend less and less time in the field! Prior to choosing geology I considered training as an ecologist or a meteorologist – both scientific work with an outdoors component.

Tell us something that most people would not know about you?

I spent two happy years studying Ancient Greek at UTAS in my undergrad. In fact, I studied as much Greek as Chemistry, which would have to be unusual for a geoscience major.

Can you share with us an amazing cultural or professional experience you had during your travels.

In September 2013 I was teaching geophysics to a small group of Kurdish geoscientists for a week in the city of Erbil in Kurdistan.

This was part of an ExxonMobil community development responsibility to increase local technical capability with our partners in the Kurdistan Regional Government.

The group was very enthusiastic to learn, as they had not been able to use modern geophysical technology before. They had old equipment and virtually no software.

Unfortunately, our course was cut short because the Peshmerga (police) station adjacent to our office was bombed and shot up by armed men.

We all had to be locked down for half a day in a bomb shelter while the situation was assessed, and we were evacuated and flown out the next day.

This was the first suicide attack in Iraq in six years – only later did we realise it was the first harbinger of what subsequently became known as The Islamic State (ISIS).

Given everything that has happened since, I often wonder how my enthusiastic students are doing, and whether they have survived and been able to use the knowledge they were so eager to learn.

Do you miss Tasmania? And if so, why?

Absolutely! I miss it so much I’ve moved back twice after having to move away for work. For me Tasmania is more than home – it’s a place I’m deeply connected to through both my European and Palawa ancestry.

My connections here go back over a hundred years on my mother’s side, and thousands on my father’s. There are special places in the landscape that keep drawing me home here, no matter how far I have roamed.