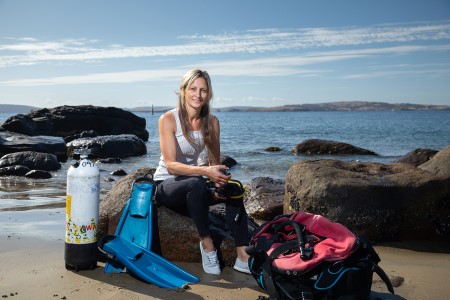 Meet the marine biologist trying to turn the tide for rare fish.

The year is 2020. While the world is awash with negative news, a glimmer of hope surfaced for one of the world’s rarest fish.

On a calm spring day, alumna Dr Jemina Stuart-Smith (BSc 2002 Hons, PhD 2007), from the Institute for Marine and Antarctic Studies, led a team of researchers and divers to a secret location in southern Tasmania.

They held their breath in anticipation as dozens of Red handfish, hatched and raised in captivity, were released into the wild, likely doubling the size of one of the last remaining populations.

Dr Stuart-Smith didn’t set out to study handfish. Her love of field work saw her volunteer for many weird and wonderful wildlife projects, including cleaning out blue tongue lizard enclosures and milking fur seals.

As part of her PhD she trekked through Tasmania’s coastal heath and alpine scrub measuring mountain dragons.

It was during a dive with the Reef Life Survey that she spotted her first Red handfish sitting on the seafloor.

“I remember staring at it intently, feeling a little guilty for invading its hiding spot, but also trying to memorise its assortment of quirky features: an upturned mouth, a fluffy Illicium perched on its head, the big red pectoral fins splayed out like hands used to ‘walk’ across the seafloor, the rough skin with patchy red spots, and the mohawk-like red dorsal fin standing high atop its head,” Dr Stuart-Smith said.

The fish has been rather unkindly described as “like a toad dipped in paint and forced to wear gloves two sizes too big”. Yet, the researchers, volunteers and donors who are trying to save it from extinction see handfish as charismatic and intriguing, and as worthy of conserving as any animal.

The Red handfish is known to inhabit only two places on the planet, both near Hobart. It’s estimated that there are fewer than 100 adults in the wild.

They are under threat from habitat degradation, pollution, development, fishing impacts and other aquatic foes, such as seaweed-munching sea urchins, who are eating it out of house and home.

Unfortunately, handfish can’t swim away, even when their habitat is being destroyed.

“Another challenge is that the juveniles have no larval stage and cannot be carried off by currents to new places, so they stay at the spawning site with the adults, even as their habitat disappears,” Dr Stuart-Smith said.

“Personally, I feel a sense of responsibility; we can’t just watch them pass into oblivion.”

Head-starting, which involves taking eggs from the wild and raising them in captivity, is another strategy being trialled.

This year, 42 of the Red handfish graduated from ‘handfish school’, where they were introduced to predators and the perils of the natural environment, and were released into the wild.

To the delight of the team, monitoring of the site where they released the fish reveals most are still alive and now, only time will tell if they thrive.

Dr Stuart-Smith coordinates the Handfish Conservation Project and is a member of the National Handfish Recovery Team.

Picture caption: Alumna Dr Jemina Stuart-Smith is leading the charge to help save the Red handfish from extinction by Peter Mathew.