The royal society of Tasmania awards 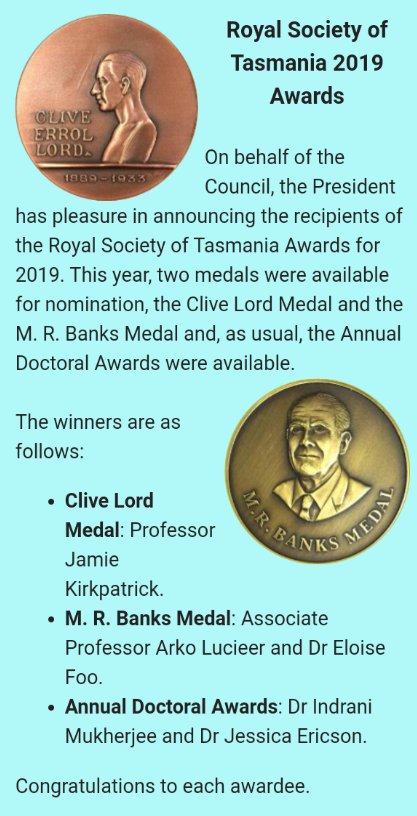 Congratulations to our new medallists and awardees.

Clive Lord Memorial Medal: Awarded to a scholar distinguished for research in Tasmanian science or Tasmanian history. The award will alternate between the fields of science and history, unless particular circumstances dictate otherwise. The awardee will deliver the ‘Clive Lord Memorial Lecture’. If not a member of the Society, the awardee will be offered free membership for one year.
A quick study of the awards would have to include Clive Lord’s contributions to the descriptions of new species found in Tasmania culminating in an invaluable handbook called “The Vertebrate Species of Tasmania” and 30 papers published in the Society’s peer-reviewed journal. Along with L Rodway’s Botany and R M Johnston’s Geology of Tasmania the handbook is highly regarded. Clive Lord described the Nototherium Mitchelli, an extinct genus of marsupial, among other species including whales and seals. Clive Lord was closely interested in the problems of early Tasmanian history and the records of the Tasmanian Aborigines (http://trove.nla.gov.au/newspaper/article/29812760) This is why the award oscillates between the disciplines of science and history. The next Clive Errol Lord medal, 2019, will be awarded in the discipline of science.

M R Banks Medal: Awarded to a scholar of distinction in mid-career in any field within the Society’s purview with an age limit of 45 years.

Royal Society of Tasmania Annual Doctoral (PhD) Award: Two awards may be granted annually in any field within the Society’s purview. No more than three years shall have passed since the award of the PhD at the award nomination deadline. Each award shall attract a grant of $1,000 from the Society.