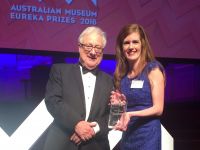 A team led by Professor Ross Large has won the prestigious Australian Museum Eureka Prize for Excellence in Interdisciplinary Scientific Research. The prize is in recognition of research into the the connections between plate tectonics, past ocean chemistry (particularly the role of the trace element selenium) and the evolution and extinction cycles of life on Earth. The team from CODES and the Discipline of Earth Sciences are collaborating with external researchers from Flinders University, the Russian Academy of Sciences, and the University of California Riverside. The awards were announced at a gala dinner in Sydney on 31 August.

Watch the team's piece on the ABC's 7:30 Report: Did mountains control evolution of humans?

Read more and watch a video on why the team believe they are uncovering the missing link in Darwin’s theory of evolution.

Find out more of the details: Notes & quotes